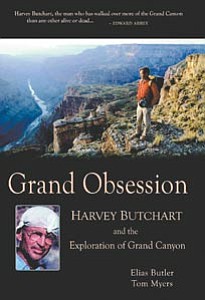 “Grand Obsession: Harvey Butchart and the Exploration of the Grand Canyon,” written by Dr. Tom Myers and Elias Butler, was released this week. The authors plan book signings today and tomorrow.

Though he'd written three books and numerous hiking logs and was an avid correspondent who left thousands of pages behind, until this week legendary Grand Canyon hiker Harvey Butchart's story was incomplete.

But in a new book, "Grand Obsession: Harvey Butchart and the Exploration of Grand Canyon," co-authors Dr. Tom Myers and Elias Butler present a multi-faceted look at not only a man driven to leave an indelible mark, sometimes at the expense of his family, but also at the history that he made and an inspiration that he was for thousands of hikers to come - the authors included.

A grueling solo hike in the early 1990s moved Myers to first contact Butchart, not because he could identify after the experience, but because he really couldn't.

"After that hike, I was sick of Grand Canyon for a while," Myers said. "But Harvey could do a hike like that then come back several days later or the next week."

At first, he wasn't thinking of a biography. He just wanted to understand, from his own perspective as an avid hiker, what made Butchart that much more intense.

"When I read his treks, it was pretty obvious he had done an incredible amount of hiking and exploring," Myers said. "What was missing was the why - why did he do it? What motivated him?"

Myers' impression was of a humble man who seemed more interested in the hiking experiences of others than in talking about his own. But as that initial meeting grew into several years of interviews and correspondence, Butchart also emerged as a man who was well aware of the largeness of his legacy, and had in fact set his mind to such an achievement decades before.

"You wouldn't get the sense that he was so competitive," Myers said. "He was a humble, grandfatherly figure, meek and mild. But under that exterior, he was intense, tough and driven."

As he dug into the story, facts weren't hard to come by. Butchart's achievements lent themselves to a kind of statistical litany - 1,000 days below the rim, 12,000 miles trekked, discovery of 108 approaches to the Colorado River, 83 summits climbed (28 of them first ascents), walls scaled at 163 places and three books out of it.

But about two years into his research, Myers realized he wasn't getting to the core question he'd initially asked - that of why. He wrote Butchart a lengthy letter with about 100 deeply personal questions about his disappointments, his regrets, the toll his obsession took on his family and about specific events like a 1955 trip down the Colorado by air mattress that killed hiking companion Boyd Moore.

"I think that if someone really wants to know about Harvey and have a quality biography, there are certain questions that have to be asked and answered," he explained.

When some time went by without an answer from Butchart, who was known for speedy replies, Myers gave him a call to have Butchart inform him, "I've chosen to assist you no further in this endeavor."

Myers told Butchart that if that was how he felt, he'd probe no further and abandon the biography, but he also pointed out that

in the absence of Butchart's input, other people would be left to speak for him. Shortly afterward, he received a 14-page letter from Butchart, typed in single space, with answers to the questions.

"I thought, 'Here's a guy who wants a biography,'" Myers said. "It was the motherlode, the most important part of the work. The rest can be pieced together through reading and correspondence. Only he could give the answers about the obsession part."

In the late 1990s, Myers abandoned the research and put the biography aside, noting that it was creating tension between Butchart and his wife, Roma, who didn't welcome a book. Though she wasn't forthcoming to Myers, he was able to include Roma's point of view thanks to interviews done by Butchart's daughter, Ann.

He decided to postpone the actual writing until the pair died, rather than add to the stress.

"In the middle to later 90s, I decided that it was probably not a good idea to keep working on it and adding more stress to the relationship and to keep pestering them," Myers said.

Butler and Myers met in 2002, the same year that Butchart died. Unaware of the voluminous research Myers had already done, Butler asked him if he knew the hiker.

"I said I knew him pretty well," Myers said. "I showed him a box that I had that had all this Harvey stuff. He asked to check it out and it sparked his curiosity."

As well as being a newspaper reporter and freelance writer with a journalism degree from Northern Arizona University, Butler is also an avid hiker and backpacker who knew something of Butchart and his legacy though he'd never had the opportunity to meet him.

To continue research, they had the cooperation of surviving family members, as well as Butchart's collection of papers at NAU and other papers that his daughter provided.

They discussed the topics that interested them most and divided the writing in half that way. Then they brought the two together, a challenge almost bigger than the initial writing given their different styles.

They also engaged in what Myers called "kind of a breech of biography etiquette" by putting themselves into the story.

"We felt that if we hiked in his footsteps and tried to do route finding, using the logs for his treks, it would give the reader a sense of what it would be like to try to do what Harvey did. We wanted to make it a little more tangible what it would take to do it," Myers said. "All miles are not created equal but you can't tell that just looking at a map."

Butchart was born in China in 1907 to missionary parents. His father was a medical doctor who passed his own intensity and drive on to his son. After his father died when Butchart was eight, he and his three siblings returned to the United States with their mother. Growing up in near poverty in a single parent home added to that drive.

"It was a humble upbringing that helped motivate him to succeed and achieve something. On the professional level, it motivated him a lot," Myers said.

Butchart was small in stature and poor at team sports but Myers describes him as "gifted athletically, genetically perfect for what he did, which was extreme hiking."

His endurance was matched by an equally strong love for the outdoors. In the late 1930s and early 1940s, he began to stretch himself in the Colorado Rockies. Myers said that if his career path didn't take him to Flagstaff, where he taught mathematics at NAU for 31 years - 22 of them as chairman of the math department - Butchart would have become to the Rockies what he is to Grand Canyon.

"It would have been a similar story, but in a different venue," Myers said. "He was driven to know something really, really well and he wanted to be an expert."

When he came to Arizona, Butchart first started exploring Oak Creek Canyon. But it was in reaching beyond the formidable standard set by pioneers like Eddie McKee and Emery Kolb that Butchart saw he could make his mark.

His most intense explorations of the Canyon started when he was in his middle to late 50s and went well beyond hiking.

"Harvey spanned all aspects, from rim to river - route finding, climbing, scrambling, getting to the river and floating it," Myers said.

While he succeeded in his goal to create a legacy no one could touch, the book also looks honestly at the cost of his obsession.

"We realized that it would be a mistake for us to exclude the negative aspects of what he did and accomplished," said Butler. "One of the things this book does is examine the effects on his personal life."

"As far as writing went, it was important to make it as honest as possible, and fair to all people who played a role," Myers said. "To tell Roma's side or the family's side might be sort of surprising or a little bit disappointing. For most of us hikers, Harvey's a hero. What I didn't know was the toll it had taken and the collateral damage around his personal life. It tends to knock him off the pedestal to a degree."

The writers also realized that to talk about Butchart's life was to also cover the history of exploration on foot in Grand Canyon. Butler said it contains a chapter on Colin Fletcher and Myers notes that it also talks about mentors like Kolb and Merrel Clubb.

"Instead of a strict biography, it turned into a complete history of foot exploration in the Canyon," said Butler.

"I've been reading Canyon books for over 30 years," Myers said. "The hiking part of Grand Canyon, there's a history and a rich heritage there. I always think it's taken a back seat to the Colorado River. There are wonderful books on the river, but for books about hikers, pickings are thin. For me, personally, this was the hiking book I've been waiting for my entire hiking life. It's our hiking heritage."

The also book contains more than 200 images. Most are photos, many never before published including of Butchart on the air mattress he took down the Colorado River. There are also about two dozen scans of letters and clippings.

"It's impossible for anyone to make a mark as big as Harvey Butchart did in the Grand Canyon because of the era he did it in," Myers said. "We're able now to blunt or mute the risks. There's a bigger safety net with a lot smaller holes then when Harvey was doing it. People have passed him in miles and buttes climbed but because he pioneered and did it extensively under totally different conditions, it set him apart. His legacy will remain Grand Canyon's foremost backcountry explorer."

The authors will host two book signings - today from 11 a.m.-1 p.m. at Books & More at Canyon View Information Plaza, and tomorrow from 6:30-8:30 p.m. at the Community Building. Tomorrow's signing includes an audio-visual presentation. This is Butler's first book. Myers is co-author of two books: "Over the Edge: Death in Grand Canyon" and "Fateful Journey: Injury and Death on Colorado River Trips in Grand Canyon."

The book is available at park bookstores and online at amazon.com.