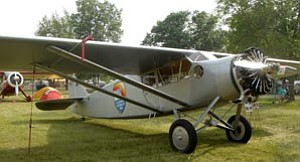 The Stinson Detroiter flew the first scenic flight over Grand Canyon, in 1927. This restored plane will be one of many at this weekend’s “Thunder Over the Coconino” air show and fly in.

At this Saturday's "Thunder Over the Coconino" fly-in at Valle Airport, visitors will be able to see the trio of planes that pioneered the air tour industry - the Ford Tri-Motor, the Stinson Detroiter and the Travel Air.

While regulars to fly-ins at the airport are familiar with the Tri-Motor, which will be offering rides again this year, this will be the first look for most at the other two recently restored planes. It's expected to be the first public appearance for the Travel Air. The Stinson made its public debut in July at the annual AirVenture air show in Oshkosh, Wis., where it won a Lindy Award for the outstanding restoration work.

According to Grand Canyon Airlines President John Dillon, the Stinson was the plane that launched the air tour industry, though it wasn't in service for very long. Parker Van Zandt, who founded Scenic Air Lines, the precursor to Grand Canyon Airlines, wanted the Tri-Motor but none would be available until the following spring. He opted for the Stinson in the interim, picking it up from the Detroit assembly line where it was made and flying it home to the airport at Red Butte.

It arrived Oct. 1, 1927, and two days later made its first flight with four Fred Harvey representatives on board. Dillon said the 45-minute route was pretty much the same that GCA's tours fly today. It was also the first plane to fly to Rainbow Bridge and to Monument Valley.

While the high wings and big windows were important features for a tour plane, its engine didn't quite match the bulk of its 46-foot wingspan and empty weight of a little over a ton.

"It was almost overbuilt for its size and ability," Dillon said. "It wasn't an efficient airplane but it got them through the fall."

This plane isn't the original Stinson that Van Zandt purchased. Its owner, John Seibold, acquired it as mostly parts from a seller in Pennsylvania over two decades ago.

"Mr. Seibold, he has a passion for this and wanted, basically, to acquire, restore and have one of every airplane GCA has ever owned and operated," said Dillon.

About four years ago, he turned it over to Chuck Wentworth of Antique Aero in Paso Robles, Calif. This was Wentworth's third restoration for Seibold.

"We had a definite goal in mind, to make it look just like it was in 1927," Wentworth said. "Right from day one, we knew where we were going."

There wasn't much in the way of salvageable material, but there was enough to copy into a faithful reproduction of the fabric-bodied plane.

"We had a lot of rusty tubing that was derelict but we used it for patterns and went from there," he said. "The wicker was completely on one seat and gave us a good pattern to copy, so we built six new ones."

The final touch was acquiring the plane's original N number, N1517, which they found in an unexpected place - on an aircraft owned by Seibold's partner Elling Halvorson.

Wentworth said there are only four intact Stinson Detroiters in the world, and only one that flies.

"The there others are in museums," he said. "Personally I don't think they'll ever fly."

This one made the flight from Valle Airport to Oshkosh, with Wentworth as pilot and Dillon co-piloting, spending 15 hours in the air over two days. Its flight speed is about 100 mph and it does best at altitudes of a few thousand feet, Dillon said.

While the wicker seats were less than comfortable - "like sitting on a five-gallon bucket," Dillon noted, "It's a blast to fly but every two hours you have to get out." - they enjoyed the rest stops at small airports along the way.

"It's a lot of fun because it gets a lot of attention," Dillon said. The plane was much anticipated at Oshkosh where hardcore enthusiasts of that era already knew the renovation was being done.

"For something as rare as this, there's a following," Dillon said.