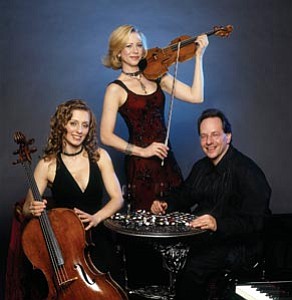 The Trio Solisti – cellist Alexis Pia Gerlach, violinist Maria Bachmann and pianist Jon Klibonoff – will open the Grand Canyon Music Festival with performances this Saturday and Sunday at 7:30 p.m. at the Shrine of the Ages.

The Trio Solisti opens the 24th season of the Grand Canyon Music Festival this Saturday at 7:30 p.m. at the Shrine of the Ages, performing from Mussorgsky's "Pictures at an Exhibition" against a backdrop of artwork by Flagstaff artists and longtime festival friends Ruth and John Waddell.

The Trio has performed at Lincoln Center's Great Performers Series in New York City, Town Hall's Peoples' Symphony Concerts at the Kennedy Center in Washington, D.C. and at the Tuscan Sun Festival in Cortona, Italy. Other venues include Seattle's Meany Hall, Carnegie Hall, New York's Windham Festival, the Moab Festival in Utah and the Telluride MusicFest, where they are the founding ensemble.

They have also been featured on NPR's "Performance Today" and they have spent si years in residence at Adelphi University in Garden City, New York.

They have released three CDs. Their most recent is "Pictures at an Exhibition," released on Endeavour Classics. Other cds of Trio Solisti are an all-Brahms CD for Marquis Classics, and a CD of music by Paul Moravec which has been reissued on NAXOS American Classics in March 2007. This release includes the world premiere recording of Moravec's 2004 Pulitzer Prize-winning work composed for Trio Solisti, Tempest Fantasy, with guest clarinetist David Krakauer.

On Friday and Saturday, Sept. 7 and 8, the Calder Quartet returns. Featuring Benjamin Jacobson and Andrew Bulbrook on violin, Jonathan Moerschel on viola and Eric Byers on cello, the quartet is named for the great American visual artist Alexander Calder. Taking a cue from their namesake, they boldly search for new ways to stretch the capabilities, combinations and definition of a string quartet. The group highlights its 2006-07 season as The Juilliard School's Graduate Resident Quartet, one of the school's highest distinctions.

Another returning quartet, Ethel, will play the festival's final weekend, opening each evening with a pre-concert recital of compositions created by students in the Native American Composers Project.

Though a traditional string quartet, with Ralph Farris on viola, Dorothy Lawson on cello, and Cornelius DuFallo and Mary Rowell on violin, their performances are anything but. Said the Los Angeles Times, "They own their music, and when they want it to roar, they roar."

Tickets are $15 for adults, $8 for children six and up. Parents are asked not to bring children under six to the nightly performances, though the Tusayan Shindig on Sept. 16 is for all ages. There is a discount for Grand Canyon and Tusayan residents, and season ticket rates are also available. Visit www.grandcanyonmusicfest.org or call 800-997-8285.