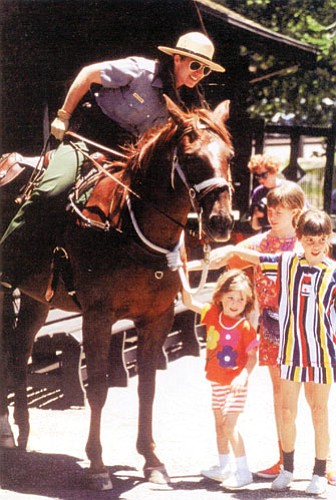 Nancy Muleady-Mecham meets with visitors while on horse patrol

If there's a word that comes to mind when reading Nancy Muleady-Mecham's books, "Park Ranger" and the recently released "Park Ranger Sequel," it's fast paced. Both books hit the ground running, veering from the graphic to the amusing in the working life of a protection ranger.

Her books have their roots in e-mails sent to her mother and siblings recounting stories from her ranger jobs at national parks all over the country.

"I've always been telling stories to my family, my mom in particular. She shared my stories with her cronies and friends. She kept saying you need to put that in a book," Muleady-Mecham said.

She eventually did, starting in 1999, though she expresses regret that her mother didn't live to see the book finished. She published "Park Ranger" in 2004. The sequel came out in the spring, as her first book entered its fourth printing. Both are published by Vishnu Temple Press in Flagstaff and are available at bookstores in the park, as well as at Barnes and Noble and on amazon.com.

She and her seven siblings grew up camping and visiting national parks with their parents who, she said, instilled her love of nature. It was her mother in particular who helped influence her inquiring eye toward the natural world and passed on her lack of squeamishness.

"My mother stopped her career as a nurse to raise her children," she said. "She'd been a cadet nurse during World War II. If we found a dead bird we dissected it. We could be at the ocean and if there was octopus, we put it in alcohol. I was just fascinated by life."

She earned her bachelor's degree from UCLA with a degree in biology, putting herself through school by working as a paramedic.

She got her masters in biology from California State at Fresno with an emphasis on paleontology and her doctorate from Northern Arizona University, focusing on fire ecology.

After graduating from UCLA in 1979, she worked as a marine biologist at Santa Catalina Island, then became the first woman firefighter in the Forest Service's Kings River District. From there she became a sawyer but decided she wanted to preserve trees, not cut them down, and sought a position with the National Park Service. She started as a naturalist but with her paramedic training, she quickly gravitated toward the protection ranger track.

"For me it was the variety," she explained. "In national parks, we're isolated and rangers are the only game in town so we're kind of forced to become all things. It was being able to do structural fire, emergency medical services, search and rescue, resource management - all of those different things all together because you never know what the next call is going to be."

In fact, park medics are in a category of their own, with a level of expertise not only in search and rescue and stabilizing patients who may be hours from help, but also in the outdoor skills needed to get to remote places and people skills when it can take hours to evacuate.

"You walk, you run, you go by helicopter," she said.

The most theatrical rush to the rescue was when she had to gallop to the train to help with a medical emergency. "I got to swing off my horse and board like in the old west," she said.

In her book she clearly relishes helicopter rescues as well, going places and at speeds that tour flights can't. She notes that she pays extra attention to the scenery on the way to a call knowing she's likely to be busy with a patient on the return.

"When we get there, it's a great relief because the cavalry has come. But maybe we can't take them out, we can't fly," she said. "At Death Valley it was five hours to the hospital round trip. You learn a lot about a person."

She said it can get stressful, especially with calls involving children. Emergency personnel who encounter intense situations take part in critical incident stress debriefings and she said it helps to be able to compartmentalize, both at work and in not bringing it home.

"In things like body recoveries you have to isolate yourself from that," she said. "You can't think of this as a person who loved and walked and talked and had a life."

From 1988 to 2003 when she injured her knee, she has worked in Death Valley, Everglades National Park, Denali, King's Canyon and Sequoia. It was at Death Valley in the 1980s that she met her husband, Kent Mecham, who now heads the structural fire division here.

She's also worked as a city paramedic and has a part time position as an emergency room nurse at Flagstaff Medical Center.

She volunteers as a firefighter and paramedic for Tusayan Fire Department. She teaches EMT courses and with the Teacher at Sea program through the University of Virginia.

A day in the life: Preventative Search and Rescue rangers take to the trail
Grand Canyon resident rescued after falling into canyon
GC Ranger wins prestigious Harry Yount Award
Texas man survives<br>150-foot fall into Canyon
Interpreting the Canyon through the eyes of a ranger