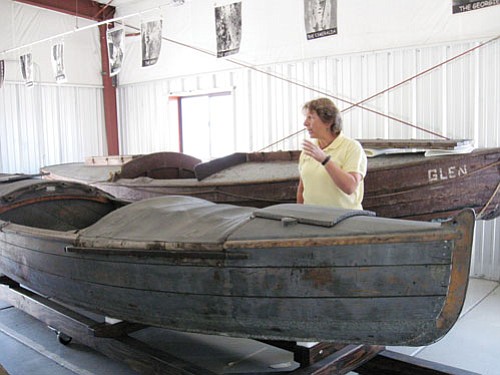 Jackie Brown/GCN Director of Cultural Resources Jan Balsom talks about the park’s historic boats in a tour for the Grand Canyon Historical Society.

In their working days, they carried explorers, entrepreneurs, scientists and scoundrels who piloted them on tumultuous adventures through Grand Canyon.

After five years of preservation efforts, those boats are slowly returning to public view, where they can continue to tell the stories of early river runners.

According to Park Director of Cultural Resources Jan Balsom, eight of the park's historic boats - Emery Kolb's Edith and Defiance, and Norm Nevills' WEN among them - were on display for as long as 50 years in the courtyard of park headquarters where they were exposed to the elements and not-always respectful attention from visitors.

"Once they're in the care of the Park Service, it's our obligation to preserve them so that we can tell their story," said Balsom.

Getting them out was tricky though as the breezeway was built around the boats. Balsom said a short-haul was contemplated before they settled on removing glass from the breezeway.

They also gathered up boats stored elsewhere in the park, such as Nevills' 1941 kayak, which had been stored in a warehouse attic though no one could explain how it got there as the stairway wouldn't accommodate it. They eventually removed it by lowering it down an elevator shaft.

Balsom said that the some 15 boats are being preserved, not restored.

"Restoring it would be making it new," she said. "One thing you never want to do with a museum object is to make it new. You make it look like it's never had a life."

The work has included stripping the linseed oil that was put on the older wooden boats as a preservative but later found to attract and trap grime, patching disintegrating fabric and crumbling leather and painstakingly re-gluing flaking paint.

"We have photos of all of them in use," said Balsom. "We have written descriptions of the trips."

Brad Dimock, of the Grand Canyon River Outfitters Association, donated his time and materials to custom-build cradles for each of the historic boats. The outfitters also provided line drawings of each boat, and protective slip covers.

The WEN, first to be completed, went on display at Canyon View Information Plaza's visitor center last summer. They are looking for a suitable space for Kolb's Defiance as well.

llection is a piece from Maj. John Wesley Powell's Nellie Powell, used in the 1871 expedition. The intact boats range from the Stone which traveled the Green and Colorado rivers in 1909 to Dock Marston's 1963 Sport Yak II made the first run of the newly-dammed river.

Other legendary boats in the collection include the Edith and the Defiance, the two boats used by Ellworth and Emory Kolb for their 1911 filming trip and canvas canoes used by David Rust in the 1920s. It also includes the Glen from the 1923 USGS mapping trip, the Esmerelda II, which failed in two bids in 1949 to be the first motor boat to travel the Canyon heading upriver, and the Wee Red, which succeeded in 1960.

One other boat in the collection, Charlie Russell's and Bert Loper's Ross Wheeler, remains near the river where it was abandoned.

None of the boats in the collection has been associated with a loss of life, said Balsom.

Boat styles show an evolution from the heavy smoothwater crafts designed for harbors and not western rivers to the big rubber rafts such as Georgie White's Woman of the River. Boatmen like Nathaniel Galloway worked on designs that fared well in shallow water and Nevills innovated with folding kayaks and brand-new (for the time) materials.

The biggest obstacle to sharing their history with the public is the lack of display space. While they will continue to displayed restored individual boats around the park, Balsom said they hope to eventually find space where all of the boats can be assembled in one place.

In the meantime, special boat tours are offered by arrangement.