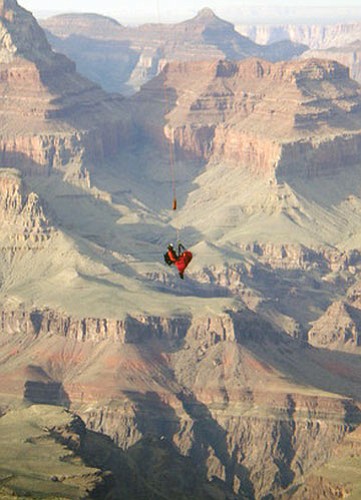 Photo/National Park Service A rescuer hangs from a helicopter above Grand Canyon. Approximately 20 people were involved in yesterday's rescue.

GRAND CANYON, Ariz. - A 47 year-old Ohio man was rescued after falling 60 feet while hiking in the Grand Canyon yesterday. The man fell shortly after starting a multi-day hike that would have taken him to Cottonwood Creek, a backcountry camping area below the South Rim. The accident occurred yesterday afternoon at approximately 3:20 p.m. on the Grandview Trail just east of the Grand Canyon's South Rim Village. The man and his hiking companions were several hundred feet down the trail when he stopped to peer over the edge and lost his balance.

A visitor at the Grandview Trailhead heard calls for help and called Grand Canyon Regional Communications Center. Park rangers responded and found the man lying injured on the trail.

Because of the steep terrain and difficult switchbacks, and for the safety of the patient rangers called for the park helicopter and extricated the man using a short-haul operation. The procedure normally involves a rescuer on a fixed line, extended below a helicopter that is flown into the rescue site. The rescuer then attaches the patient, via a Bauman bag, and flies with them to a safe location - in this case, the parking lot at Grandview Overlook. Once at the parking lot the patient was stabilized and transported by ground ambulance to the South Rim Helibase. From there he was transported by Classic Life Guard to the Flagstaff Medical Center to be treated for life-threatening injuries.

Approximately 20 people from the National Park Service were involved in the rescue. Personnel from the park's emergency services, interpretation, wildland fire and aviation, and law enforcement divisions, and park volunteers all responded to the accident scene and provided assistance.

Park rangers want to remind visitors that when hiking in the canyon or along the canyon rim it is important to use caution near the edge - to be cautious of your footing and your surroundings. To learn more about hiking the Grand Canyon and safety tips, visit the park's Web site at http://www.nps.gov/grca/planyourvisit/backcountry.htm or call the