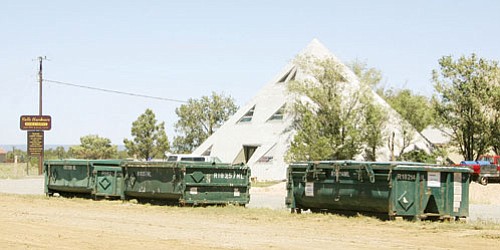 <br>Patrick Whitehurst/WGCN<br> Bins full of fill material are visible outside of the Valley Hardware Feed and Supply store in Valle.

VALLE, Ariz. - A number of government agencies are continuing their investigation into a large amount of fill dirt in the Valle area that recently tested radioactive and quickly began removing the material from the ground. The material, according to government officials, came from an area near the Orphan uranium mine located within Grand Canyon National Park, where construction crews are working on road improvements. Levels of radioactivity remain to be determined, as officials with the Arizona Radiation Regulatory Agency (ARRA) are still in the process of analyzing the fill material.

"We have some results," said ARRA Director Aubrey Godwin, adding that, on average, the material might not turn out to be very high.

"We did confirm that there was some of the ore apparently there," Godwin said. "Basically we went up and took a couple of samples to see if there were some radioactivity involved. There was some involved. We don't have enough samples to characterize the waste."

Test results could be complete as early as this week. Meanwhile, officials are continuing to investigate how the material was released, and where it was released, as some fill material may have been sold to a location in Williams and other possible locations, officials said.

"There are a lot more questions we've got than answers," Godwin said.

Agencies involved in the matter include the National Park Service, the Arizona Department of Environmental Quality, the ARRA and the Bureau of Reclamation (BOR). Park Service officials entered into an agreement with the BOR on the Orphan Mine project, who contracted with Pangea Construction to perform the work, according to officials involved in the investigation.

According to Peter Soeth, spokesperson for the BOR, crews with Pangea began removing the radioactive soil last week and placing it in covered containers.

"Based on what comes back from those result, we'll determine what to do with that material," Soeth said.

The material, he added, consisted mostly of gravel.

"There was some material left over from the cleanup at the orphan mine. What is was the gravel that was used to make the road," he said. "Recently there was some concern raised as to the radiation levels of those piles. The contractor Pangea has some done some preliminary radiological scans. Most of them came back with the normal levels, naturally occurring radiation levels, which is very common in the southwest."

The material was to be used as AB for a new parking lot for Valle Hardware Feed and Supply.

Debbie Serpas, an associate with Valley Hardware Feed and Supply, said it has taken a while to remove the AB material.

"There was a contract that stated this material was totally safe, so we bought it from the hauler and then we found it wasn't," Serpas said. "He got it from the Orphan Mine. It was off the side of the road or something. It wasn't inside the mine. It was supposed to have been tested and it was signed off as being safe."

Serpas said she hopes to see the situation resolved so that work on the new parking area, as well as a new 50 feet by 100 foot building, can continue.

"There will be no problem on this property because of it," Serpas said, adding that Valle Hardware Feed and Supply will remain open for their customers.