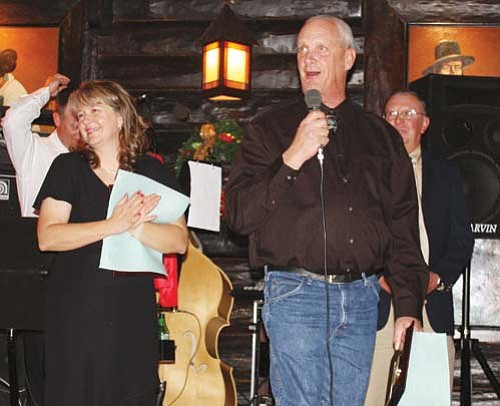 TUSAYAN, Ariz. - They do so much for the Grand Canyon, Tusayan community. That was the message offered to Lora Pitsinger and Robbie Evans with the Tusayan Fire Department during the annual Rotary Holiday Dinner Dance. The gala event was held Dec. 12 at the South Rim's historic El Tovar Hotel. Both Evans and Pitsinger were given the illustrious Community Leader Award by members of the Rotary on the Rim organization, hosts for the dinner dance. They received an engraved plaque during the event, which honored their services to the community.

"I was shocked to win. When they called my name I was totally floored," Pitsinger said.

Evans is chief of the Tusayan Fire Department, while Pitsinger is second in command. Both are paramedics and routinely offer a number of services to the Grand Canyon community. Services include classes on fire prevention and awareness, EMT classes and CPR classes.

"We try to keep people updated," Pitsinger said, adding that the EMT and CPR classes are popular ones in the area.

"We just started the new hands-free CPR classes in the fall. We have such a better survival rate with this new CPR that is going around," Pitsinger said.

Pitsinger has worked in the fire and emergency medical services field since 1994. She was promoted to assistant chief of the Tusayan Fire Department in July of this year. Both Evans and Pitsinger have extensive training in a number of emergency-related practices. Originally from Ohio, Pitsinger moved to the Canyon area in 1986. She currently lives in Tusayan.

Evans is originally from New York. He grew up outside of Niagara Falls, where he worked as a volunteer firefighter beginning at 18-years-of-age. He moved to Arizona in the 1980s and has lived in Tusayan for 18 years. He's been fire chief for 10 years. Prior to that, Evans worked for the fire crew at the Grand Canyon Airport, a job he held for eight years.

Evans said the Tusayan Fire Department works well due to the support of volunteers and members of the community.

"I feel we're just doing our job. It's the support of the community, all of the volunteers and their families. Without them we're nothing," Evans said. "We've got a lot of good people. It's come a long way."

Both said they enjoy living in the small Tusayan community.

"I like the people I have met up here over the years," Pitsinger said.

"I'm a pretty big hunter, so I love living up here. We're all pretty tight, the Fire Department and the community," Evans said.

Craig Andresen, treasurer for the Rotary on the Rim organization, said the award is handed out to individuals each year who offer outstanding service to the community. Andresen will be president-elect for the Grand Canyon Rotary group next year. He said the local Rotary club makes decisions for the award annually.

"We have a very small group of people that executively makes that choice and then presents it to the rest of the Rotary club," Andresen said.

He called the Pitsinger and Evans' award "long overdue."

"Both Robbie and Lora have been such an integral part of Tusayan and our community at large," Andresen said. "In this last year they have done so much. They did the first joint effort between an elected fire district and the Forest Service in a joint burn project. As far as we know it's the first time this has happened anywhere in the country."