Editorial: The Canyon's wild side 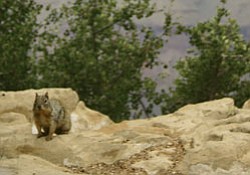 This week's story, 'A mountain lion becomes a legend,' (Page 2B) concerning the large mountain lion killed on Highway 64 roughly a year and a half ago and now on display at the Double Eagle Trading Post in Valle, serves as a strong reminder for readers that visitors to northern Arizona share that land with a large variety of wildlife. Many of those creatures can be found on display at the Double Eagle Trading Post, providing an up close and personal view of creatures that many will not get a chance to see in their natural environment. Mountain lions, both big and small, are included in that list.

Those who visit the Grand Canyon, for instance, may only catch a glimpse of a California Condor and will, almost inevitably, encounter a ground squirrel or two during their Canyon visit - the latter of which counts as one of the park's top offenders when it comes to human and animal interaction. Bites are common when it comes to the squirrels, who have grown so accustomed to the snacks offered by tourists in the area that they have come to expect it. Park officials ask that visitors do not feed them.

Those riding the Grand Canyon Railway® may see elk and mule deer, too, but there are plenty of other animals who call the national park home. Canyon wildlife runs the gamut from large mammals, such as big horn sheep, to small lizards like the horny toad. Other large mammals include bobcats, mountain lions, coyotes and more. Smaller mammals, such as the ringtail cat, raccoons, beavers, gophers, chipmunks, bats and others also call the Canyon home. Bird watchers can spot a treasure trove soaring over the bluffs of Grand Canyon, including bald eagles, wild turkeys, peregrine falcons, ravens and much more.

As is always the case, caution is recommended when it comes to observing wildlife in their natural habitat. A good rule of thumb to remember when it comes to wildlife is that, if the animal appears bothered by your presence, you are too close. Nor is it ever a good idea to feed wildlife, not even the small ones. Those traveling to the national park with pets should remember to keep them leashed at all times and never leave your pet unattended. Small animals often attract large predators - even at the Grand Canyon.