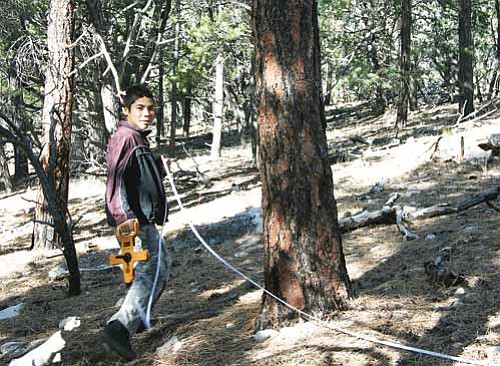 (Editor's note: the following is a report written by students in Jesse Byers' Seventh Grade class at Grand Canyon School. The students learned about the differences between healthy and unhealthy forests.)

GRAND CANYON, Ariz. - We are the seventh grade class at the Grand Canyon middle school. Over the past few weeks we have been learning about what a healthy and an unhealthy forest looks like and what we should do if it is an unhealthy forest. We measured how many fuels (pine cones, grass and dry pine needles) are in a forest and if it is good or bad for the forest. We can learn from this so, if there is a fire, the firefighters can know about how long the fire will burn or if it will destroy something historic.

So now you know who we are and what we did. We are going to tell you about the good things about fire and the bad things. Let's start with good parts of fire. Fire helps burn duff and litter so trees get more nutrients and are more spread apart. Small fires help prevent bigger forest fires. It burns plants to make soil richer, which makes our forest healthier. When fire burns tree branches, the sunlight reaches the ground and that helps new life to grow.

Now, enough about good things that fire can do, let's talk about the bad things it can do. It can destroy homes, and can destroy towns and cities. It can kill many animals and people, and it can also damage our forest really badly.

Wildfire can destroy everything in its path. But it is the hotshots job to stop it. Hotshots make fire lines that are three feet wide and three feet deep. The fire lines include burning small fuels to stop the big fire. Many fires are started from small fuels that are accumulated from years of fire suppression.

Fire suppression means putting the fire out right away. In the 1960s, people hated all fires. So the firefighters put out every small fire that started. By doing this it made the forest very unhealthy, for example in Sequoia National Park. The giant trees were not growing, because of fire suppression. The clustered trees were blocking the sequoia's sun light, so the baby sequoias couldn't grow. Fire opens up the pine cones so that new seeds can grow. It clears the trees that are blocking the sun from the sequoias.

There are other people that help put out the fires called smoke jumpers. They have an advantage because they come by air and can reach the places where you can't get on foot or vehicles. They also make fire lines like the hotshots.

The hotshots could not make prescribed burns without any fuels. The fuels are the main reason why they are making the prescribed burns. There are certain fuels that they are worried about, so they burn them in a prescribed burn so they do not burn in a wildfire. The four most important fuels are twigs, logs, litter, and duff. The twigs have many names. They can be called one-hour fuels, because when you soak them in water it takes one hour to dry out. Ten-hour fuels are the same thing, only it takes 10 hours to dry out. The same is true with 100-hour and 1,000-hour. The litter is the fuel on the ground. It is the stuff that you can tell what it is, like pine cones, wood chips, and twigs. The duff is the smaller stuff, under the litter. You can't tell what it is, because it is decayed matter. Decayed matter is old litter that makes new soil. Each fuel is different, and it depends on what type of forest it is.

On Oct. 6, our class went on a field trip into the forest in Grand Canyon National Park to make measurements in the forest. We measured the amount of fuel on the ground to help us figure out how healthy or unhealthy our local forests are.

This is how you lay transects. First you get a compass. Make sure flag number one is between your feet. Turn the bearing to 90 degrees, and then turn your body until "red Fred is in the shed". Then grab one end of the tape measure and the other person grabs the other end of the tape measure and goes toward wherever your compass was pointing. Keep pulling until you have gone 25 meters. Then you measure the slope, then the fuels, then the litter and the duff. And that is how you lay transects.

Once you have the tape measure down and ready you have to measure the number of fuels. The main fuels are 1cm, 3cm, 8 cm and over. You just have to tally them up into different groups. The next measurement is the slope's steepness. You measure it by using a clinometer. One person stands at each end of the transect, and one person holds the clinometer, a piece of paper with a straw and certain measurements on it. They look through the straw into the other person's eyes, and the string on the paper falls on a certain measurement and shows the steepness of the slope. Those are all of the measurements on a transect.

A week or two ago we went on a field trip to a forest of all different types of trees to collect data that we can share with the firefighters. After we recorded the data from that area we walked all the way back to school. The day after that, we came up with questions that we could answer with the data we collected. We used a bar graph to show the answers to our questions. Before we started on the bar graphs we had to come up with a prediction. After we were done, the bar graphs told us if we right or wrong with the predictions we made. We did this trip was so that the firefighters could look at our data to help them pin point how healthy or unhealthy our forests are.

Wildfires are good occasionally because they help the forest by keeping the forest from being over grown. If we put out all fires, then if a wildfire starts it would really get out of control.

We need to remember to properly douse campfires and cigarettes butts. Also beware of fires when you live in a densely populated forest. We are doing well on prescribed burning. By doing that, if we do get a wildfire it will not get out of control. That way we can stay safe in our homes. Our class is trying to help by sharing our information with the park service.