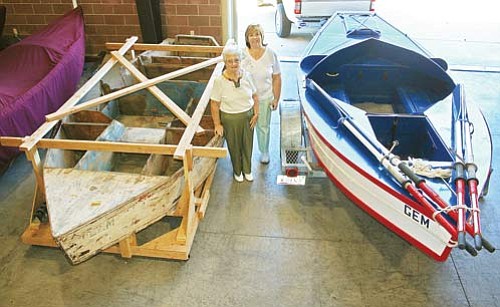 <br>Submitted photo<br> Marge Woodroof (left) is pictured with her daughter, Debbie. Woodroof's hand rests on a GEM boat built by her Uncle-in-law, Moulty Fulmer. Marge last saw that boat in 1957 when it looked more like the boat to her left.

Marge Woodroof last saw the boat her Uncle-in-law Moulty Fulmer made in Muncie Indiana in 1957.

Moulty was getting ready to trailer his boat named the GEM out to Grand Canyon for yet another river run through the Canyon. Fulmer had successfully piloted the GEM through Grand Canyon in 1955 and 1956.

High water in 1957 on the Colorado River forced Fulmer and the other river runners he was traveling with to leave their boats at Phantom Ranch. Fulmer and his friends hiked back in to Phantom Ranch in 1958 and continued on their river trip.

Unfortunately, one of the river runners flipped and lost their boat downstream of Deer Creek. That boat happened to be the kitchen boat.

Without cooking gear, the river runners now in two boats, decided to abandon their boats to the river and hike out of Grand Canyon at Toroweap.

The Toroweap Ranger John Riffey loaned the river runners his car, and they drove around to Lake Mead, where they rented a small motorboat and traveled up the lake in search of their boats.

To their surprise, Georgie White, "Woman of the River" was exiting Grand Canyon in her big pontoon boat, towing the lost kitchen boat. With one boat found, the river runners searched another two days but only found one of the two remaining boats. Fulmer's GEM was lost. It had simply disappeared.

Six years later, the wreck of Fulmer's GEM was discovered in an area of Lake Mead called God's Pocket. Lake Mead officials preserved the boat, and passed it on to Grand Canyon National Park in 1979. Fulmer's original GEM is now a part of Grand Canyon's historic boat collection.

Tom Martin, Physical Therapist at the Grand Canyon Clinic on the South Rim, has built an exact replica of the 1957 GEM. Martin met up with Woodroof and her daughter Debbie this week with the assistance of Grand Canyon National Park Special Collections Curator Kim Besom and the replica GEM was placed next to the original boat.

"It's a great match" noted Woodroof. "Moulty would be happy to see the replica. It looks just like I remember it in Muncie, only it's a lot shinier."

Martin plans to take the replica of the GEM through Grand Canyon in the next few months on a winter river rafting trip. "We sure hope we don't lose the replica in Lake Mead on this trip. Fulmer had a few good runs of the Grand before losing his boat. We can only hope to be as lucky as Fulmer," he said.