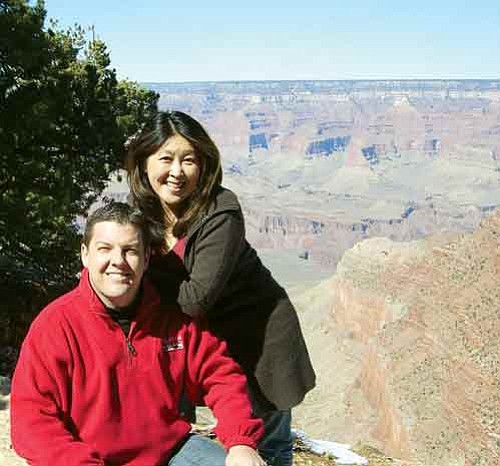 <br>Submitted Photo<br> John and Mika Dillon won the Taster's Choice Award during the recent Rotary Chili Cook Off in Tusayan.

According to John Dillon, the recipe for "Mika's Chili" will remain a secret.

"It's my wife's secret recipe so she deserves all the credit. She's a great cook. She's from Japan, so a lot of her secret recipe stuff comes with a lot of Japanese ingredients. Anybody that knows Mika knows she is a cook extraordinaire," Dillon said.

While Dillon works as the director for the Western Discovery Museum in Tusayan, Mika Dillon works as a tour guide for Xanterra. She has won three cooking contests in the past, according to John Dillon.

"She's only entered three contests and she won all three times. She won our Rotary cook-off three years back. She was very pleased with that, very happy," he said. "I've had a ton of requests for the recipe. Mika says she is just going to keep it secret for a while."

Despite his wife's cooking prowess, Dillon said he was surprised the family's chili won the Taster's Choice Award.

"I was very surprised. There was some great chili there. We don't claim to be chili connoisseurs, so it was nice. We had a couple chefs come up and say it was great," Dillon said. "I had a lot of strangers come up to me and they were very complimentary. It's a wonderful community event. It's fun to just participate, let alone win. It's a fun thing every year."

"We had a good crowd. The chilis were great," Andresen said. "Mark Jensen from the IMAX won for best cornbread. The cornbread disappeared in the blink of an eye. I'll bet there were 20 to 25 different chilis, all different varieties. The Navajo Taco, those were a big hit again."

"Two went to the Kaibab Learning Center and one went to the boy scout troops," Andresen said.

Erin Noojibail, board member with the Kaibab Learning Center, said the children's facility had a number of plans for the grant money.

"It's really great that the Grand Canyon Rotary Club is supportive of our organization here. We got a grant to get the one-year-olds a horseshoe table," Noojibail said. She said the other grant will be used for a science table for two-year-olds.