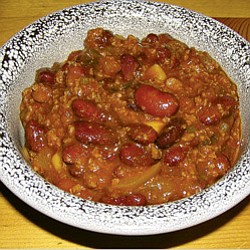 A bowl of chili can be pretty unassuming at first, but hidden beneath those beans is a story of war. Anyone who knows a thing or two about chili, not the chile pepper kind mind you, but more of the con carne kind, can attest to this fact. The battle over the best chili, like the food itself, can often be pretty heated.

There are many who say chili dates back to the Incan, Aztec and Mayan cultures, or at least a form of the ever popular food is said to have been common back then. The people of the Canary Islands are also said to have had a hand in the creation of the dish, as they are rumored to have made their own concoction of peppers, onions, spices and meat since the early 1700's.

Most, however, say chili came from the Lone Star State and nowhere else. It is claimed to have been the food of choice for the famous outlaws Frank and Jesse James. It's also said to have been one of the meals of choice for cowboys on the long, lonely cattle trail.

But what type of chili is the best? It is here where the debate begins. Is it the green kind, the veggie kind, the kind with rattlesnake meat in it, or the kind that sets your mouth on fire? Hundreds of books on the topic have been written, along with numerous cookbooks claiming to have the best recipe in town.

No matter what one's opinion is of chili, this Monday's Chili Cook Off might be a good place to start seeking the answer. The event, scheduled to begin at 5 p.m. at the Tusayan Fire Department will offer a virtual smorgasbord of the dish, from green, red, meat-filled and beyond. For chili lovers, there's likely no better place to be in northern Arizona on Monday than the South Rim.

New Mexico chile plant selected to be grown in space
Canyon Corner
Rock your tastebuds at second annual Rock-tober Fest
Around the Canyon, week of May 5, 2010
El Tovar Chef cooks up a place in Arizona Centennial cookbook