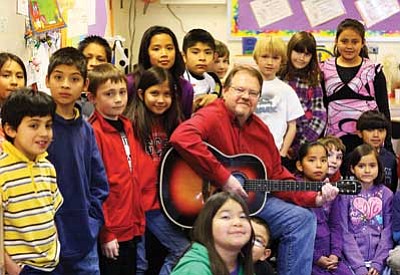 GRAND CANYON, Ariz. - With many school districts facing difficult budget situations, administrators across the state have been forced to make difficult decisions, cutting many programs that enrich students' educations. Often topping the list are music and band programs.

Not so at Grand Canyon School.

George Haughton teaches music at every grade level. Haughton visits K-3 classes teaching general music, comprised mostly of singing. Fourth grade students learn the recorder before moving on to traditional band instruments in fifth grade. Haughtondirects a sixth grade band as well as a seventh and eigth grade combined band. The program is rounded out with the High School Band.

"It's a very popular program here at the school," Haughton said.

"I may get something out of my drawers but I still have to arrange it," he said.

"Right now, they only know three or four notes so I had to keep the music in that range," Haughton said. "They are also doing kind of a rock version of Hot Cross Buns."

Along with musical opportunities, GCS students also have a unique chance to learn the art of film making through Haughton's Film Class.

Haughton plans to host a movie night in the spring to screen all the movies his students have produced in the last three years.

"Not a lot of people have seen them," he said.

In the last four years, Haughton said he has had up to 14 students in the film class. Currently, three students are enrolled.

The class begins by covering the basics of film making; camera movement, lighting, script writing and sound. The class continues with the actual writing of a movie including storyboard mock-up.

"Then, we rehearse it and we film it," Haughton said.

The longest movie the class has produced, Little Bully, is 40 minutes long. Last year's movie will likely end up around 30 minute long, although it has yet to be edited. Students use Canon mini DV cassette cameras to gather their footage. The students edit the raw footage using Adobe Premier Pro.

Haughton said the class recently produced a five-minute silent film and currently his students are producing a music video to Beyonce's Single Ladies.

For more information regarding music and film opportunities at Grand Canyon School call (928) 638-2461.