Phantoms lose to St. Michaels at regional tournament
Looking forward to next year 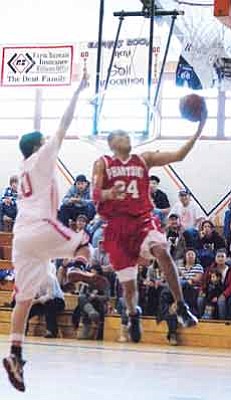 The Phantoms ended their season with a 61-77 loss to a highly skilled St. Michaels squad Feb. 5.

At the end of the first quarter St. Michaels held the lead by one point. The Phantoms remained within striking distance as they found themselves down by 12 at half-time.

The first play of the third quarter saw freshman Luke Streit hit a long three pointer to cut the lead to nine.

The Phantoms never cut the lead any closer.

The Cardinals ran away with the game in the second half. With a short bench and seven-man rotation, the Phantoms ran out of gas. The Cardinals pushed the lead to 20 in the third quarter.

"We played our best," said sophomore point guard Jared Ruyle. "It might have been one of the best games we played all season."

Senior forward Daniel Celis ended his high school career with a solid game, scoring 16 points. The core for next year's squad, Andrew Araiza, Jared Ruyle, and Larrin Talas, each ended their season strong with 12, 11, and 11 points respectively. With a highly talented incoming freshman class, the Phantoms look forward to next season.