Kiel, Thurston to be honored by Grand Canyon Historical Society
Annual awards to be held July 17 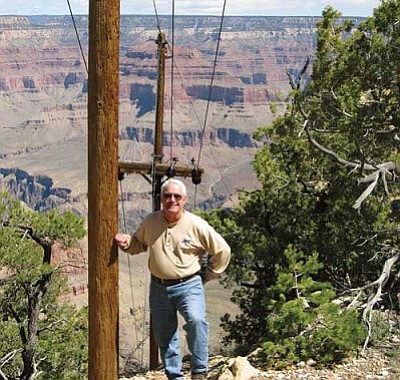 GRAND CANYON, Ariz. - Long-time Grand Canyon-area notables Don Keil and Robert. P. (Bob) Thurston will be inducted into the Grand Canyon Hall of Fame Saturday. The 13th annual induction will include a presentation on the two individuals, set to take place during a Grand Canyon Historical Society picnic at Shoshone Point beginning at 11 a.m. The names of the two recipients will be engraved on a permanent plaque. Awards, scholarship chair Al Richmond said the Hall of Fame awards began in 1998 following a meeting with former park superintendent Rob Arnberger.

"Him and I sat down and were talking about all the work people have done up there at the park for the community, and we came up with this idea. We've been doing it ever since," Richmond said.

The society typically honors two individuals per year; one living and one deceased. The presentation is open to the public, Richmond said.

"In our first year there were several," Richmond said. "For the deceased, we are trying to go back into history for some of the people that have contributed to the community but are no longer around. We just want to recognize them for all the work they have done."

The awards, presented by the National Park Service and the Grand Canyon Historical Society, consist of a presentation discussing the various achievements of the honorees.

Kiel will be unable to attend the event, Richmond said.

"He said he would really like to be there, but he's up in Utah now," Richmond said.

A perpetual plaque for the honorees can be found at the Shrine of Ages within the national park.

"There is a name plate that is put on there. All the names are put on there," Richmond said.

The organization began as the Grand Canyon Pioneer Society in 1984 in an effort to contribute to the history of Arizona's premier natural wonder. The group changed their name to the Grand Canyon Historical Society in 2002. The 501(c)(3) organization's mission is to study and preserve the history of sites, historical photographs and artifacts of the Canyon and surrounding areas; and to support the restoration of sites and buildings at Grand Canyon National Park, according to their website. The organization puts out their own publication as well, called the Old Pioneer, which comes out twice a year. They can be found online at www.grandcanyonhistory.org.