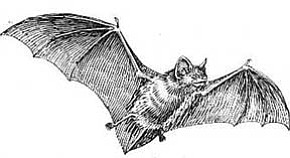 FREDONIA, Ariz. - Allen's lappet-browed bats, some weighing the equivalent of just three Hershey's kisses, fly distances longer than a marathon each night from lower elevation canyons to drink water and eat insects at ponds atop the Kaibab Plateau.

That was one of the findings from a weeklong bat survey conducted on the North Kaibab Ranger District in early July by a group of government agencies and volunteers.

Members of the U.S. Forest Service, the Arizona Game and Fish Department, Northern Arizona University and volunteers from Bat Conservation International, who came from as far away as Oregon and Washington D.C., spent the week of July 5 studying the elusive nocturnal creatures. Using a technique called mist-netting, the group caught and released hundreds of bats at more than 25 water sources around the plateau.

"These bats are roosting in the crevices of cliff faces in canyons and traveling great distances each night to these Ponderosa lakes," said North Kaibab Biologist Angela Gatto, adding that one bat had traveled 14.5 miles and another 17.5 miles from roost to water.

Previous studies have produced similar findings, such as greater western mastiff bats and spotted bats that travel from the Grand Canyon each night to forage at meadows atop the Kaibab Plateau for nightly nourishment at distances of more than 25 miles each way.

The Kaibab Plateau is home to at least 13 species of bats, a diversity likely made possible by the significant elevation changes and accompanying variety of habitats in the area.

"Various mountains and plateaus provide these sky islands near canyon habitats across Arizona" that make ideal conditions for bats, Gatto said. Arizona is home to 28 species of bats, second only to Texas in diversity. This year's bat survey on the Kaibab focused on the Allen's lappet-browed bat, named for the large lobe-like lappets curling around its head. The bat is designated a sensitive species by the U.S. Forest Service. The group wanted to learn where lactating females are living with their newly born pups.

Researchers glued a small radio transmitter, about the size of a pinto bean, to the hair on each bat's shoulders, making it easy for the animals to shed the device within a few months of the tracking. The radio data indicated that the mother bats leave their pups each night in crevices high up the cliffs of Kanab Creek Canyon to seek out water sources miles away in the Ponderosa pine forests atop the plateau.

"Amazingly, a bat we radio tagged this year and tracked to a roost in Kanab Creek used the same roost as [a bat] we captured and radio tagged in 2005," said Carol Chambers, professor of Wildlife Ecology at NAU. "By reusing the same roost over several years, this seems to indicate high quality roosts."

Statewide Bat Coordinator Angie McIntire, of the Arizona Game and Fish Department, said one reason bats merit the attention of researchers is because they are the number one predator of night time insects, such as moths, beetles and mosquitoes.

"They really help keep insect populations in check," McIntire said. "They're a very important component of the ecosystem."

Each little brown myotis bat can eat up to 1,200 mosquitoes per night, Chambers said.

McIntire added that widespread misperceptions exist that bats often carry rabies. In fact, they are no more likely to carry rabies than any other wildlife species, she said.

To learn more about bats in Arizona, visit http://www.azgfd.gov/w_c/bat_conserv_az_bats.shtml.