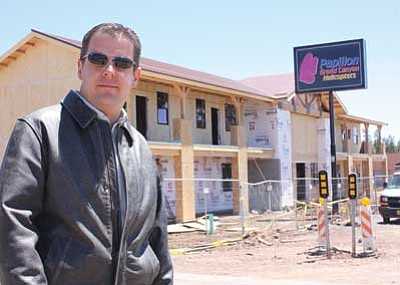 Patrick Whitehurst/WGCN<br> Director John Dillon stands before the Western Heritage Museum in Tusayan. The museum is slated to open over the Fourth of July weekend.

TUSAYAN, Ariz. - With about a month left before opening its doors, work on Tusayan's newest attraction continues apace.

The Western Discovery Museum is slated to open its doors to the public July 3. Museum Director John Dillon said a grand opening for the roughly 12,000-square-foot facility will be held over the Fourth of July weekend.

"We have penciled in and are on track for a grand opening Fourth of July weekend," Dillon said.

Construction on the site, formerly the location of Papillon Helicopters, has been proceeding at a brisk pace in order to meet the opening day deadline.

"It's been going fantastic. Obviously, after more than a year of delays from the county, we finally have a museum, which really went up in a matter months. Anyone that has walked around here, driven by it, is just astounded at the progress. They've done a wonderful job. Our construction team, day and night, is all over this site," Dillon said.

The museum will offer a number of exciting Old West attractions. Western icon Buffalo Bill Cody will be a part of the Western Discovery Museum as well, according to Dillon. Visitors to the museum will be able to view original footage from Cody's 1902 Wild West show, purchase Buffalo Bill's Wild West Show memorabilia and more. Mounted buffalos and Conestoga wagons will also be a part of the Cody exhibit.

Other attractions to the museum will include graphics consisting of dime novels, newspapers, letters and other facets of the Old West. Lithographs, drawings, and carvings will be on display at the Western Discovery Museum as well. Interactive exhibits, the history of tourism in and around the Grand Canyon of the Old West, and an original saloon called "The Tusayan Bar" will also be among the museum's highlights, with the latter airing western films for visitors to the bar. Live re-enactments, public programs and campfire circles will also be offered, Dillon said.

"It's a western-themed museum," he said. "It's dedicated to telling the story of the western culture and the Kaibab Plateau and the Canyon, and the indigenous people that have lived here."

Dillon said he expects the museum to be a popular addition to the South Rim communities.

"We're very excited. Obviously now that there's brick and mortar, we're getting a lot of attention. It's been talked about for more than a year, so we're very excited to now be just a matter of weeks away from getting it together," Dillon said.

Installation on the museum's exhibits is expected to begin in mid-June.

"We will be working day and night to meet our goal of July 4 weekend," Dillon said. "We're hiring now and we're accepting applications for all positions."

Museum admission fees will be approximately $8 for adults, $5 for children. Children under 5 get in free when in the company of a paying adult. For more information, including special group rates, visit the museum online at www.westerndiscoverymuseum.org. The museum can also be found on Facebook.