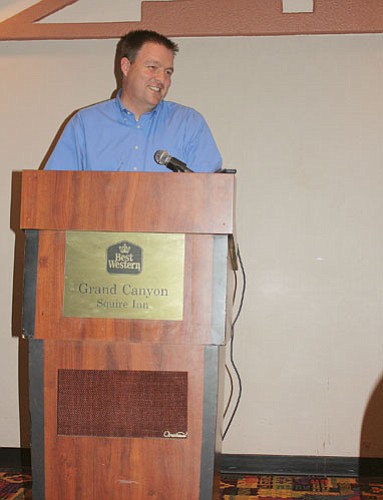 <br>Patrick Whitehurst/WGCN<br> Tom Belshe with the League of Arizona Cities and Towns.

TUSAYAN, Ariz. - Shifting from a county-controlled area to a town isn't an easy task, but there are a lot of agencies willing to help. That was one of the messages delivered to Tusayan residents by Tom Belshe of the League of Arizona Cities and Towns. The March 17 meeting, hosted by members of the United for Tusayan organization, the group behind the recent push for incorporation, was held at the Grand Canyon Best Western Squire Inn. Belshe explained the ins and outs of becoming a town during the meeting, in what he said would constitute the first of many meetings with the League and other agencies eager to help get the incorporated community on its feet.

"Your incorporation will be celebrated by the entire state," he told the roughly 50 people in attendance.

While County members met to canvass the votes for the March 9 election this week, an interim city council will be seated April 6, Belshe said. County appointed council terms would end Dec. 31, with an election deciding who will be seated for a regular term planned for later this year. Belshe said those elected officials are expected to take office Jan. 1. Anyone interested in a council position can apply through the county, he said. Five council seats will be available in all. Tusayan's new city officials would have to decide whether to stagger those terms or not. Not staggering them, he said, would mean an entirely new city council every two years.

Belshe said that Arizona's cities and towns have a lot of requirements, including police and safety, planning and zoning, adopting a model tax code and obeying meeting laws.

"Government's business needs to be done in the open," Belshe said. "There should never be a decision behind closed doors."

Belshe said there were a number of tasks that needed to be done right away, such as public safety, maintaining county roads that will become city roads, and hiring administrative positions, particularly a city attorney and city manager. Belshe suggested that the newly formed council seek as much volunteer help as possible.

"You start out with volunteers," he said. "The idea that you need to have dozens of (employees) here - it's not true."

Belshe added that there are a number of ways to provide police protection as well, including the development of an Intergovernmental Agreement (IGA) with the Coconino County Sheriff's Department or hiring staff to provide law enforcement. When it came to a city council, there would be rules that council members would have to follow, such as discussing business outside of council, quorums, accepting gifts worth over $25 and other rules. The league would offer training for council members when the positions are filled, Belshe said.

When it comes to growth in the community, Belshe said any decision should be considered closely.

"You always need to think about doing growth the right way," he said.

A city sales tax would also have to be implemented as soon as possible, according to Belshe. While the town of Tusayan would be eligible for state-shared revenue, he said that amount would be relatively low due to the population of Tusayan. State-shared revenue comes from a number of taxes, which includes state income tax, state sales tax, highway revenue funds (gas tax) and vehicle license tax. Based on initial calculations, the town of Tusayan would be eligible for roughly $200,000 in state-shared revenue. Final numbers, however, will be determined at a later date. A local sales tax, while it may mean residents and tourists both will pay a little more to shop in the area, will be far more important to the day-to-day operations of the town, Belshe said.

"You will all have input into budget," Belshe said. "You get to decide. It's your money now."

Belshe also mentioned rules regarding conflicts of interest and nepotism when it comes to small town city councils. Any council members faced with a conflict should recuse themselves from the meeting, he said.

"There is nothing wrong with having a conflict of interest," Belshe explained. "But it has to be stated in the meeting."