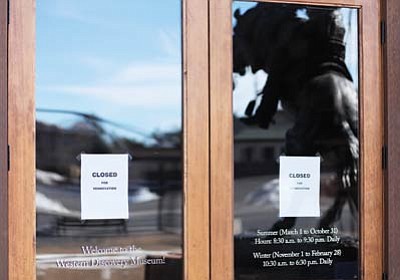 Ryan Williams/WGCN<br> A sign in the door of the Western Discovery Museum informs visitors that the attraction is closed for remodeling. Owners plan to reopen the facility as the Grand Canyon Wild West Experience.

TUSAYAN, Ariz, - The Western Discovery Museum, opened to the public just six months ago in July, has closed its doors for what the museum's representatives are calling a remodel.

ClayAnn Cook said she plans to step out of her role as general manager at Canyon Flight Trading to oversee the makeover. She said the museum will reopen in April under a new name - The Grand Canyon Wild West Experience.

"We'll still have the same content but we're going to utilize it in a little different way," she said. "It won't be a museum."

According to Cook, the attraction's new concept has not yet been approved by all of the owners but will be more interactive in nature.

"It's going to have 100 percent visitor interaction, high energy, some education and a lot of fun," Cook said. "Really, I think it is going to be a nice compliment to our community and really add value to the community. It will be something that will be kind of unique for this area."

Gary Martinson, a representative for the museum, presented a brief update on the facility during the Tusayan Town Council Jan. 19 regular meeting. Like Cook, he said no final decisions have been made but that plans for the new attraction are being formulated.

"The ownership has been not all that excited about the attendance over the last six months," he said. "That is one of the reasons we need to look at this thing and act very quickly."

Martinson went on to say the museum will likely get an overhaul inside and out.

"Adjustments may include some stage presentations of music or plays, incorporation of food and beverage and for the most part we see the impact being internally to the building with some façade work on the outside."

Martinson has been in touch with Interim Town Manager Cynthia Seelhammer with regard to zoning issues.

Cook said the new and improved facility will be a draw for Tusayan residents and visitors to the area.

"International visitors are going to just love it," she said.

The museum came to the Tusayan area as part of a partnership with the Martinson family, contractors for the museum, the Halvorson family, and members of the Stilo Group based in Italy. The museum is located along Highway 64 opposite the IMAX Theater. The large, two-story building was erected at the site that once housed Papillon Helicopters.