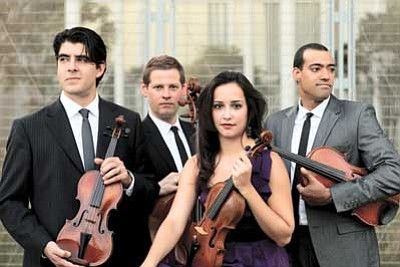 Courtesy photo<br> The Catalyst Quartet, top laureates and alumni of the internationally acclaimed Sphinx Competition, will bring their dynamic performance style to the Shrine of Ages Sept. 2, 3.

GRAND CANYON, Ariz. - The sound of music isn't limited to Austria. In just over a month, a three-week series of chamber music concerts will fill the Shrine of Ages with music as part of the 28th season of the Grand Canyon Music Festival.

When many people think of chamber music, they likely think of traditional string quartets playing classical music. While this scenario does fall into the chamber music category, the festival's organizer, Flautist Clare Hoffman, said she defines chamber music much more broadly.

"We have always had an expansive view of what chamber music is," Hoffman said. "It really just means intimate music. It's music that can be played in small venues for small numbers of people in a very close and intimate setting."

Hoffman and her husband Robert Bonfiglio, a harmonica player, originally conceived of a festival located at Grand Canyon after taking a much-needed break from the music business in New York hiking in the Canyon in 1982.

The two carried their instruments in their backpacks as they hiked the corridor trial from the South Rim to the North Rim and back, stopping along the trail to play music amidst the rock walls of the Canyon. Part way into their trip, the two happened upon Park Ranger Joe Curos.

"He heard us and couldn't figure out where the music was coming from for a couple of days," Hoffman said. "He finally tracked us down at Cottonwood campground and invited us into the Ranger's cabin to play a concert."

When Hoffman and Bonfiglio returned from their excursion in the Canyon they contacted Curos and inquired whether a music festival at Grand Canyon might be a possibility. The following year the festival was born.

When it comes to booking musicians and ensembles for the festival, Hoffman said she and Bonfiglio look to bring a diverse program to the Grand Canyon.

"We're interested in all the intriguing things going on out there in the music world and we try to bring them into the venue that is chamber music," she said. "I'll meet some musicians and say 'I have to have them at the festival.'"

Along with performances by world-renowned artists, the festival includes outreach programs as well. In 2001, organizers inaugurated the Native American Composers Apprentice Project (NACAP) devoted to teaching the art of composition for string quartet. 2011 composers-in-residence Raven Chacon, Michael Begay and Trevor Reed will work with students from five Navajo and Hopi high schools before work shopping the compositions. The compositions will be premiered and eventually recorded by the ETHEL postclassical string quartet and the Catalyst Quartet.

Hoffman said due to the success of the program, she added the catalyst Quartet to the mix.

"The program is getting bigger and bigger and it's really more than one group can handle so we thought we nee to bring in another group who can do it," she said.

The festival opens with performances Aug. 26, 27 by ETHEL. Tickets to all performances are $15 for adults and $8 for children 6-years-old and up and students. For more information call (800) 997-8285. For a complete schedule, information and tickets, visit www.grandcanyonmusicfest.org.