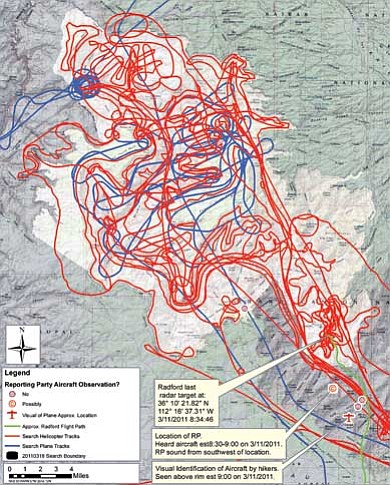 On Sunday, March 13, the NPS received a report that a general aviation pilot had detected an activated emergency locator transmitter (also known as an ELT) approximately 30 miles northwest of Grand Canyon Village in the vicinity of the Fossil Corridor. The park's helicopter was dispatched to fly the area, but did not find any signs of a downed plane nor did it detect the ELT. Because no corresponding report of a missing plane could be found, the search was called off.

On Monday, March 14, the Coconino County Sheriff's Office (CCSO) contacted the NPS about a missing person 47-year-old Joseph Radford of Glendale, Ariz. In the course of their investigation, the sheriff's office determined that Radford owns a red, RV6 homebuilt, experimental aircraft, also missing, and that Radford's plane was seen at Grand Canyon Airport shortly after 8:30 a.m. on Friday, March 11. Because the disappearance of Radford and his plane may be connected to the ELT activation, search efforts were resumed.

Interviews with backpackers in the area of the radar track indicate that a plane was heard at the time of the RV6's flight on Friday. In addition, one hiker remembers seeing a red plane flying overhead in that area.

Based on radar tracking information obtained from the town at Grand Canyon Airport last Friday, the NPS helicopter concentrated search efforts on Monday in the Scorpion Ridge area, an area located in the vicinity of the Dragon Corridor. On Tuesday and Wednesday, the park's helicopter and fixed-wing aircraft both flew search patterns in the Fossil Corridor and Scorpion Ridge areas with no success. Meanwhile, the CCSO continued their investigations and began contacting backpackers known to have been to these areas to determine if anyone had seen or heard the plane on Friday.

The NPS has used both a fixed-wing airplane and helicopter in search efforts over the last several days. The fixed-wing aircraft has primarily been used to reacquire the ELT signal and visual reconnaissance of upper rim areas. The helicopter has focused its efforts below the rim in side canyons and rough terrain looking for visual clues. To date, these efforts have not provided any further clues.

Radford is described as a 47-year-old white male, with blue eyes, graying hair and a receding hairline. He is 5'11" tall and weighs approximately 190 pounds. His plane is described as an RV6 Kit Built, cherry red airplane with tail number N650RV.

The National Park Service is leading joint search operations with the Coconino County Sheriff's Office. Both agencies are grateful to the Civil Air Patrol for their invaluable assistance with investigations including radar and ELT analysis.