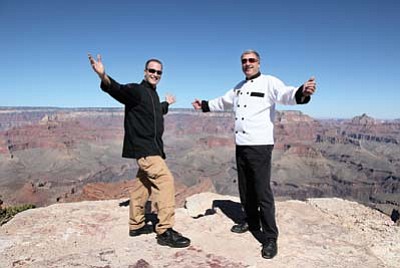 TUSAYAN, Ariz. - When it comes to food pairing events, most people think of wine as the beverage of choice. But the beer in all its varieties makes for some interesting combinations for the taste buds as well.

The Grand Canyon Chamber of Commerce and Visitors Bureau and Grand Canyon Brewery have partnered to bring the public an evening of upscale food and beer pairings along with a casino night and live music. The Rock-tober fest takes place Oct. 28 at the Grand Hotel.

After attending a food and beer pairing at the Wigwam in Phoenix, Josie Bustillos, Grand Canyon Chamber executive assistant and event organizer, said she was inspired to organize a pairing in Tusayan involving some of the area's local culinary talent.

"Instead of just having one chef, we have three," she said.

"Anybody can participate in the casino. It's open to the public, visitors, anybody, without a reservation," Bustillos said.

"It's not like it's just going to be a hamburger and a wheat beer," he said. "This is going to be food that is individually cooked for the style of beer used, incorporating into the food and then paired with the alcohol. It's going to be more of a five star setting as far as the food goes. It's going to be a little more high end than people are used to for this area."

The evening will include four pairings with two intermezzos, palate-cleansing courses.

"They're probably going to end up using six or seven styles of our product," Peasley said. "They're going to have our local Harvest Pumpkin Porter, whatever they decide to incorporate."

The casino opens at 7 p.m. and will include roulette, craps, blackjack and Texas Hold'em with a $50 buy in for poker chips. Those wishing to play roulette and craps will receive $25 in "funny money" to get started.

"As individuals win, those chips then go toward raffle tickets," Bustillos said. "As the evening progresses, deals get better and they get more for their dollar."

Participants can than choose what particular items they would like to use their tickets for. The event will feature a separate silent auction as well.

Those not taking part in the pairing won't miss out on tasting Grand Canyon Brewery's beer. Beers that are chosen for the pairing will be poured throughout the casino night as well.

Local favorite Exit 64 will take the stage when gaming starts on the casino floor.

Xanterra will provide a free shuttle service in and out of Grand Canyon National Park.