Santa pays a special visit to Havasupai tribe
Toys for Tots, St. Mary's Food Bank, The Friends from Utah and the US Marine Corps work together to bring Christmas to isolated tribe in need 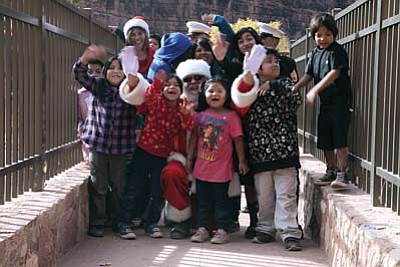 Children of the Havasupai Tribe gather around Santa after he arrives in the Grand Canyon Dec. 4 in Supai, Ariz. After Santa’s arrival, Marines from Environmental Services Division helped him pass out toys gathered by volunteers of the Flagstaff Marine League Charities and the Flagstaff Toys for Tots organization to more than 175 children. Cpl Jessica Ito/U.S. Marine Corps

For 17 years, Toys for Tots and the United States Marine Corps (USMC) have flown CH-46E helicopters into the Canyon, delivering an early Christmas to the children of the Havasupai Tribe. In the New Year, V-22 Ospreys will replace the CH-46's, marking the end of a decorated era for the choppers.

"This is it for them, after this trip they'll fly down to the boneyard in Tucson," Tina McGee said, whose husband Lieutenant Colonel James McGee worked with the Marine squadron and helped start "Operation Havasupai" in 1996 with Hal Jensen, Flagstaff's Toys for Tots coordinator at the time.

While waiting for the first flight to leave, McGee said in total, four flights into the Canyon were likely. In years past, the project used four helicopters, but due to financial and time restraints, the Marines flew two helicopters this year from Edwards Air Force Base in California and Fort Worth, Texas.

"This year we ran into quite a few hurdles that we had to jump," McGee said. "What gave me my focus was that I had to keep telling myself the reason we come here and do this, and why we've always done it is for the kids. The best part of this is when you're flying in and the children from the village are gathering and running and jumping, they have so much enthusiasm and joy and they just can't wait to see the Marines and Santa. We bring Christmas to the kids."

Organizers scaled back Operation Havasupai considerably this year, but at the same time, McGee said the tribe's need for food and supplies has increased. Not only do the Marines take toys to the children, they also fly down food, courtesy of St. Mary's Food Bank, school supplies, blankets and hygiene items.

"It's a unique opportunity to be able to fly these helicopters into the Canyon," Lieutenant Colonel Scott Craig said. He has flown into the Canyon for Operation Havasupai four times.

"It's always good flying out here. Any time things are challenging, Marines perk up and are game for it," Craig said.

The Ch-46 helicopters used for the Operation Havasupai are a part of Marine Corps history.

"These helicopters were in Vietnam. They are so tough and in such good shape." Colonel Adam Holmes said.

Despite the Ch-46's tenacity, Holmes said the military will transfer over to V-22 Ospreys in January, which are too large to fly into the Canyon.

"This is probably it," Holmes said about Operation Havasupai. "It was hoped that we could do more helicopters and more Marines this year, but the fiscal reality has really limited our ability to do that, but we wanted to do something. This went all the way to the commandant of the Marine Corps to come back here because of how much impact this has, legitimately, beyond the toys."

Flagstaff Toys for Tots coordinator Dick Lucas has been involved with Operation Havasupai for 15 years. He believes the project will continue despite military cutbacks.

"Even if the Marines stop doing it, the private sector is willing to do it. So I don't envision it stopping," he said.