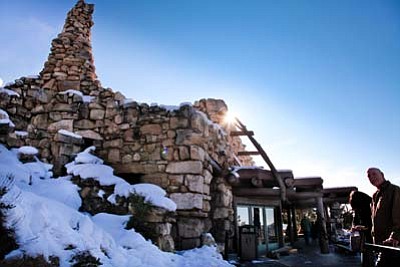 GRAND CANYON, Ariz. - Isolated from the other notable structures peppered around Grand Canyon Village, Hermit's Rest peeks out - partially concealed by the earth - just a few feet shy of the South Rim's edge.

Originally designed in 1914 as a rest stop for Canyon visitors, the imaginative construction was dubbed the most "Mary Colter-esque" building to date, featuring her distinctive ability to create a narrative out of stone, wood, and of course, random objects she salvaged from around the southwest.

"There were a big knockdown drag out type thing when they decided to build the place," Xanterra employee and historian Henry Karpinski said to the Grand Canyon News Dec. 20. "There was some who wanted it to be a copy or at least in the same vein as the El Tovar. It's widely believed that it was she who ended up saying, 'you know what? I want it to be of the hill, not on the hill. I want to do something different,' and so that is when she came up of that whole storyline of the hermit."

Finally liberated to work with complete artistic freedom, Colter designed Hermit's Rest intending it to resemble the living quarters of a solitary hermit who had just stepped out to find his dinner, hence it's name.

"It is supposed to be completely dreamy here, she's taking you to another world," Karpinski said. "But great damage has been done to the building over the years. At one time, it was just an old building. It wasn't a treasure yet. We know better now."

Hermit's Rest was originally created as a rest stop for weary sightseers who took the eight-mile journey from the El Tovar, or for hikers heading down Hermit's Trail. Now, it houses a gift shop and snack bar, along with the chance to capture some peace and quiet, something quickly vanishing among the hustle and bustle of the visitors to the natural wonder.

"You can have a solitary moment here, almost any time of the year, more so then any other building up here. It just doesn't happen on the rim very often," Karpinski said.

As well as the exterior building, constructed with stone gathered from the area, the chain-smoking Colter designed the magnificent interior, all the way down to the furniture, some of which are still original.

"What some people may not know is that the floor is one big cement slab," Karpinski added. "She took a pencil or her finger or her cigarette, who knows, and drew out each slab individually."

And, of course, Colter's signature fireplace does not disappoint.

The massive alcove, with an odd-shaped stone resembling a buffalo head jutting out directly above it, dominates the main entrance. The design makes it appear as though, instead of a hermit; a giant Viking took up residence in the rubblestone building.

Colter even strategically smudged the fireplace stones with soot and draped fake cobwebs in order to achieve her vision of a lived-in home.

"Apparently, there was a Santa Fe executive, some stories say it was a Fred Harvey or a cowboy, who knows, they were laughing at her while she was doing this. She spins around on the ladder and they said, 'I'm sorry Ms. Colter, we don't mean to make fun, but all the work and effort you are doing to make this new building to look old.'

She quickly retorted something to the effect of, 'I can't believe you are laughing given how much I'm charging you.'"