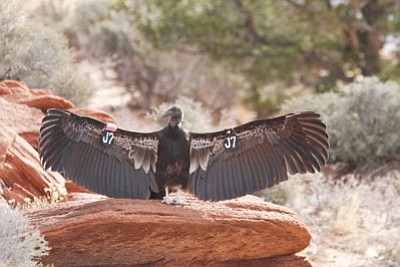 A California condor suns itself. Identification tags are visible on both wings.Submitted photo

VERMILION CLIFFS, Ariz. - Three California condors will be released to the wild in the Vermilion Cliffs National Monument in northern Arizona at 11 a.m. Saturday, Sept. 29. The public is welcome to observe the release from a viewing area where spotting scopes will be set up and experts will be available to answer questions.

• Driving directions: Take Highway 89A from Kanab or Page to the Vermilion Cliffs (from Flagstaff take Highway 89 to Highway 89A). Turn north onto BLM Road 1065 (a dirt road next to the small house just east of the Kaibab Plateau) and continue almost 3 miles.

• Details: Informational kiosk, shade structure, and restroom a the site.

This will be the 17th annual public release of condors in Arizona since the condor recovery program began in 1996. Condors are hatched and reared in captivity at The Peregrine Fund's World Center for Birds of Prey in Boise, Idaho, and transported to Arizona for release to the wild. Condors also come to the release site from the Oregon Zoo, Los Angeles Zoo, and San Diego Zoo Safari Park.

Currently, 76 condors are in the wild in the rugged canyon lands of northern Arizona and southern Utah.

"After this release, we will have 79 condors in the wild in just this one region," said Chris Parish, head of The Peregrine Fund's condor recovery operation in Arizona. "As a young man working on a cattle ranch in the condor's historical range in the 1980s, I would never have thought this possible. Here's to the next 79."

The world's total population of endangered California Condors is 416, with a total of 231 in the wild in Arizona, Utah, California, and Mexico. Condors were reduced to just 22 individuals in the 1980s when the program was begun to save the species from extinction.

For more information about California Condors in Arizona: www.peregrinefund.org/condor.