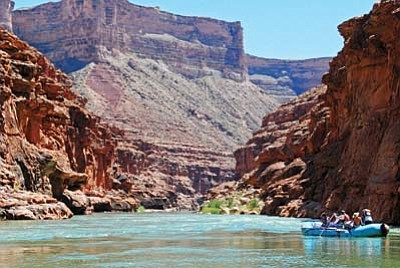 River rafters will be reimbursed for canceled launches because of the government shutdown. Photo/NPS

GRAND CANYON, Ariz. - The Grand Canyon National Park announced today that all river permit holders who were denied their scheduled launch because of the government shutdown will get a refund for permit fees.

"The park worked closely with affected parties to develop this plan, and I appreciate their understanding and support," Park Superintendent Dave Uberuaga said.

River permit holders will also be able to reschedule for a Colorado River trip with their choice of dates in 2013, 2014, 2015 or 2016. The permit holder must submit their choices within 60 days of the government reopening. No more than three launches will be permitted in a day and the new trip must adhere to the trip length of the chosen season.

Permittees who had launch dates three days prior to opening and including opening day, may choose to get a refund for permit fees and reschedule with the same parameters as outlined above or launch after opening. The maximum number of launches will be adjusted to four per day for the first two days after opening. After that, the maximum will be three launches per day until the backlog has been cleared. River permit holders with the current launch date will have priority to launch on their scheduled date.

Commercial river companies that scheduled launches during the government shutdown will be able to carry over lost user days in the 2014 season.

A user day is equal to one passenger on the river over the period of one day. Therefore, if a company was to launch with 10 passengers for 10 days, it'll be able to carry over 100 user days in the 2014 season.

The Park Service will send permit holders details outlining their options in the plan and any priority each may have.

The park is also looking at options for other permit holders, and will give information on any options it may offer soon.