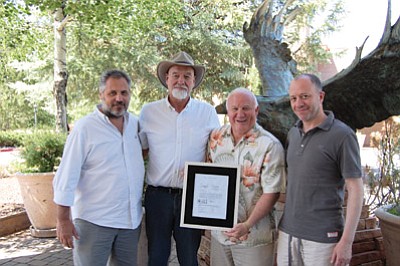 Stilo representatives Vittorio Bianchi and Federico Pellicioli present a framed copy of a 20-acre deed of property at Kotzin Ranch to Town of Tusayan Mayor Greg Bryan and Council Member John Rueter June 5. The land was donated to the town as part of a revised development agreement approved by the council in March. Another 20-acre deed donated by Stilo to the town is in escrow pending approval of a road easement application being reviewed by the Kaibab National Forest. Submitted photo

TUSAYAN, Ariz. - After initially supporting town of Tusayan's Forest Service roadway access application to build a road around school property to reach Kotzin Ranch, part of the proposed Stilo development in Tusayan, Grand Canyon School board members decided they didn't like the idea after all.

The board revisited the issue during its July 8 regular meeting after the Center for Biological Diversity circulated a June 24 letter challenging the town's application. The center claims the application violates the deed restriction between the Forest Service and the school district, which states the district's 80-acre property in Tusayan can only be used for school purposes.

"If they're (Center for Biological Diversity) going to challenge it, then we need to make a decision. Are we going to spend valuable school resources, money out of the classroom, to fight a legal battle over the ownership of the land?" said Pete Shearer, the board clerk. "We didn't want to take a chance of going to court. I think we all felt the same way."

But that didn't stop board members from requesting the town amend its application to remove access through the Grand Canyon School site via Long Jim Loop.

"When the town submitted their application, it became the only option, and that raised some eyebrows," Shearer said.

Along with liability issues, Shearer added there are other opportunities for road access that don't affect the health and safety of the current and future kids and residents.

"It's not about politics, it's about the safety of our kids," Shearer said. "Having a four lane highway through that school site is not in the best interest of the community."

One of the speakers present at the meeting, former school board president Clarinda Vail, said she and others in the community were concerned that there was little information provided to the school board when the request came through, and the town submitted the application without giving the public a chance to comment.

Vail went on to say that her largest concern was that this was never part of Tusayan's General Plan.

"It was completed about a month before they submitted this application," Vail said. "So there were roadways listed in the general plan, but this being an alternative was never mentioned. It certainly wasn't the intent of people like Pete (Shearer) and I, who have worked so hard to acquire that property for so many years, to have it become a major roadway to Kotzin."

Shearer and Vail helped to secure land for the school district in 2008 after the passage of the Education Land Grant Act. Under the legislation, which was based on an 1870 statute allowing transfer of government land to colleges, public school districts may purchase up to 80 acres of federal land, at $10 per acre, for educational use.

School Board President Kevin Hartigan was on vacation when the board changed its mind, but said the district started looking at how the roadway application would affect the school about a month ago.

"At that time we thought that it would be best to skirt the property rather than bisecting it," Hartigan said. "We weren't granting to go ahead and build a road, just to go forth with the scoping process, to go out for public review and do all the studies."

Stilo representative Andy Jacobs said the criticism that the town offered one option in the Forest Service easement application is false. The maps portion of the application shows two options, KS-1 and KN-1.

Stilo believes the KS-1 option makes the most sense for the long-term development of Tusayan as it offers a more direct route to Kotzin, where residential homes are planned. It also gives a direct route from those neighborhoods to the future school site, so if a family living at Kotzin has kids in school it is a convenient route.

"The route was the preferred route providing good access and that's why it was agreed upon. It had minimal impact on the school, but it had major potential positive impact for the community," Tusayan Mayor Greg Bryan said. "We're the applicant, we got their (Forest Service) approval. "If everyone agrees to fly to Chicago and you get on the plane and someone says, 'oh no, wait, let's go to Nebraska instead, well..."

Jacobs said the Italian developer is disappointed the school board changed their mind on their support for the proposed road alignment without letting them know they had any concerns.

Jacobs added Stilo will defer to the Forest Service on whichever road alignment they deem appropriate.

Bryan said the town hopes to schedule a meeting with the board to go over their decision, "with all the correct information" on hand.

"It is a bit insensitive to a partnership that was created between the development group and the school to suddenly make this new decision without any discussion between the developer as well as the town who is the applicant," Bryan said.

After the meeting takes place, the Forest Service said it will decide how to move forward.

"We understand will be taking place soon between the mayor, school superintendent and president of the school board," the Forest Service wrote in an email. "We are hoping that will help inform our trajectory."