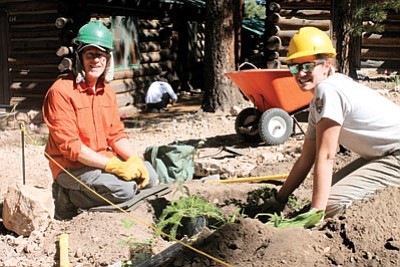 GRAND CANYON, Ariz. - Grand Canyon National Park volunteers love plants. There's no two ways around it and why not? Where else do you get a chance to work at one of the most beautiful places in the world while being part of the cycle of life?

Most volunteers and employees in Grand Canyon's Vegetation Program will tell you there is something therapeutic and valuable to nurturing and helping to grow, re-vegetate and care for the park's plant species. This is one reason volunteers enjoy volunteering with Grand Canyon's vegetation department and why the department has become increasingly popular.

"We have a lot of volunteer events at the nursery," said Ahsa Jensen, biological science technician for the park's nursery crew. "Thankfully nursery work is pretty easy on your body and is pretty easy to understand. It's also a really soothing environment - working with plants and baby plants and taking care of and nurturing them."

Originally from Oregon, this is Jensen's second season as a seasonal employee at the nursery. Over the years she has worked with a number of volunteers on different projects and with the vegetation program.

"We have volunteers of all ages, typically we'll have high school Youth Conservation Corp (YCC) as our youngest batch, although sometimes we work with fourth graders and that's really fun," Jensen said. "Different crews come in and they're in their 20s and 30s and we have older, retired people that volunteer a lot - they love working at the nursery."

Although according to Sarah Sterner, a vegetation crew coordinator for the park, volunteers are the lifeblood of the program and they will accept volunteers from ages five to 85.

Sterner helps coordinate volunteer opportunities and said volunteers will log over 20,000 hours per year with the department.

"We're getting the work of hiring an additional 20 seasonal positions," Sterner said in her annual report. "That saves the park over $500,000."

In comparison to other departments in the National Park Service (NPS), the Vegetation Program at Grand Canyon is relatively new, it was started at the Canyon in 1993. The program was originally established to restore and repair land in the park which has been impacted by foot traffic and development. Since its inception, the program has branched out to include work on both rims and the inner Canyon as well as restoration work along the river corridor.

As a young program, park employees and volunteers have their work cut out. There are over 1,750 known species of plants in the park, which is more accurately closer to 1,900. Around 201 of those are exotic plants, about 10 percent of the plant population, which compared to other parks is pretty low, according to NPS. There are also 10 species that are found only in areas specific to Grand Canyon and one of these is the endangered - Sentry milk-vetch plant. Additionally there are 23 species that are specific to the Grand Canyon Region of the Colorado Plateau.

According to NPS, the Grand Canyon has the second greatest known plant diversity in the National Parks in the U.S., with only New River Gorge National River in West Virginia beating Grand Canyon with over 1,900 plants.

As part of its operations, the program has on-going re-vegetation projects on both the North and South Rims of the Canyon.

Recently Sterner, Jensen and a team of park employees and volunteers transported a trailer of native plants from the South Rim's nursery for a re-vegetation project at the North Rim.

The weekend project invited volunteers to help employees build berms and plant flowers, grasses and shrubs around historic cabins on the North Rim.

The goal of the project, which began in August 2012 and will last another four years, is to help prevent erosion and further damage to the guest cabins.

"The historic cabins are owned by the Park Service, but are operated by the concessionaire (Forever Resorts). Those cabins are degraded because of the heavy erosion," said Mike Wolcott, biological science technician for the North Rim's vegetation program. "The erosion of the soil, which is due to all the traffic between the cabins, is causing mud to build up on the uphill side of these cabins. That rots the sill logs - the base logs of a structure and when the base logs of a log cabin rot it's a major, major construction project to replace them and it's even more expensive than you might think when it's in a national park and it's a historic structure."

The project is being completed in sections not only because it takes awhile for plants to mature enough for relocation, but also because of limited funding and manpower. Although partially funded by Forever Resorts, the project is a big endeavor and takes as much funding as manpower to complete. That is another reason why volunteers play an important role in this and other park projects.

"We couldn't do it without them," Wolcott said. "It's important just in terms of budget realities...the things they (government land agencies), by law are required to do, typically they do not have the budget and staff to do without volunteers."

"The reason volunteer work is important, I think, is that it gives volunteers a chance too really know the park in a way that they otherwise wouldn't know the park," Wolcott said.

"It's like an inside look at what really goes on in a national park and most want to volunteer and give back to the Park Service. They care about the parks - it's a demonstration of how much they care that they do volunteer. They really feel a deeper connection with the park."

Secondary benefits of the project are beautification and naturalization to the Canyon.

Since 2012, over 9,000 native grasses, flowers and shrubs have been planted around the cabins. According to NPS, without volunteers this and other vegetation projects at the park would be impossible.

More information for those interested in volunteering with the Vegetation Program or any other volunteer department of NPS is available by visiting www.nps.gov/volunteers.