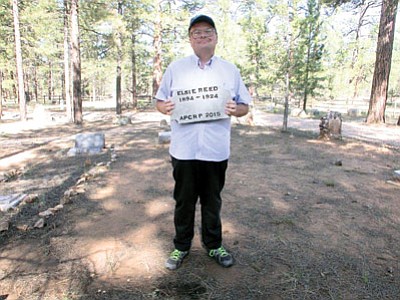 GRAND CANYON, Ariz. - On Aug. 14, a small group of historians gathered at Grand Canyon National Park's Pioneer Cemetery to place a tombstone at the grave of Elsie Reed, who died on July 4, 1924 of a gunshot wound suffered several days earlier.

"I thought it was very sad and tragic, and thought it even sadder that her grave was unmarked - although it once did have a marker," Anderson said.

When Reed died from her gunshot wounds the authorities ruled her death as a suicide. However, today historians of the Grand Canyon are not convinced that is exactly what happened.

"There were no powder burns on her hands consistent with her firing a gun and they tend to speculate that she was murdered by her husband, Frank Reed, ostensibly because she was fooling around with area rancher Martin Buggeln," Anderson said. "In those days, it was still considered acceptable for a man to kill a cheating wife, and historians think (but can't prove) that the authorities of the day covered up for Mr. Reed."

After investigating the story further, Anderson requested permission from the National Park Service (NPS) to place a marker on her grave plot, which he located through cemetery records.

After NPS granted permission, the tombstone was placed at the gravesite. Anderson, David Schmittinger and Kim Besom with the NPS, Besom's son and Emily Keil representing the NPS attended the placement.

"As Elsie Reed probably did not have a funeral (suicides often didn't in those days), I said a few words in commemoration of placing the stone at the grave of this 29-year-old woman who died so violently 91 years ago," Anderson said.

Myths, legends and facts from Grand Canyon's past
New book details history of final resting place of some of Grand Canyon's finest and most notorious
See the cemetery under a full moon
Woman dies in car accident on North Rim of Grand Canyon
Historic Grand Canyon Pioneer Cemetery closes, no space left