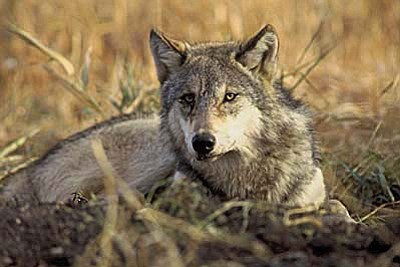 State and federal officials are trying to determine if a gray wolf, spotted several times north of the Grand Canyon was recently shot. Photo/Center for Biological Diversity.

GRAND CANYON, Ariz. - On Dec. 29, 2014, reports said a female gray wolf, possibly one that has been spotted in recent months on the North Rim of Grand Canyon National Park, had been shot and killed in Utah, according to a group dedicated to the protection of endangered species.

Michael Robinson of the Center for Biological Diversity said the wolf was killed Sunday near Beaver, Utah, north of the canyon. It reportedly was mistaken for a coyote, the group said in a release the evening of Dec. 29. Whether the animal, which was fitted with a radio collar, was the same one seen on the North Rim will be determined in the coming days, the group said.

The Grand Canyon wolf, named "Echo" in a children's naming contest this month that drew hundreds of contestants from around the globe, was confirmed through genetic analysis to be a female originating from the northern Rocky Mountains, at least 450 miles away.

"It's heartbreaking that another far-wandering wolf has been cut down with a fatal gunshot," said Robinson in the release. "This female wolf could have helped wolves naturally recover in remote regions of Utah and neighboring states. Federal authorities need to conduct a full investigation into this latest killing, which is part of a disturbing pattern."

Wolves are an endangered species in Utah; the Center, however, said "the Justice Department has systematically failed to enforce the Endangered Species Act in respect to illegal shootings of animals supposedly mistaken for unprotected wildlife species; notwithstanding that a fundamental rule of firearm and hunter safety is never to pull the trigger without being 100 percent sure of the target."

"Wolves in Utah deserve real, on-the-ground protection," Robinson said. "That means, first, keeping them on the endangered species list; second, spreading the word about their presence as an endangered species; third, prosecuting those who kill them; and finally, developing a science-based recovery plan so that instead of one or two lone and vulnerable wolves, Utah and the West will eventually boast hundreds more wolves to stave off extinction and help keep ecosystems in healthy balance."

Last month the Center released a first-of-its-kind analysis that identified 359,000 square miles of additional habitat for gray wolves in 19 of the lower 48 states that could significantly boost the nation's 40-year wolf recovery efforts. The study indicated the gray wolf population could be doubled to around 10,000 by expanding recovery into areas researchers have identified as excellent habitat in the Northeast, West Coast and southern Rocky Mountains, as well as the Grand Canyon, the area where a radio-collared wolf was photographed in October.

The report documented 56 instances over 30 years where wolves have dispersed from existing core recovery areas to states where they have yet to reestablish, including Colorado, Utah, California, New York, Massachusetts and Maine. These events, which frequently ended in the dispersing wolves being shot, highlight the need for continued federal protections and recovery planning to increase the odds for dispersing wolves to survive and recolonize former terrain. The most famous dispersing wolf, OR-7, traveled hundreds of miles from northeast Oregon to California and has started a family along the border of the two states. Courtesy of www.nationalparkstraveler.com.