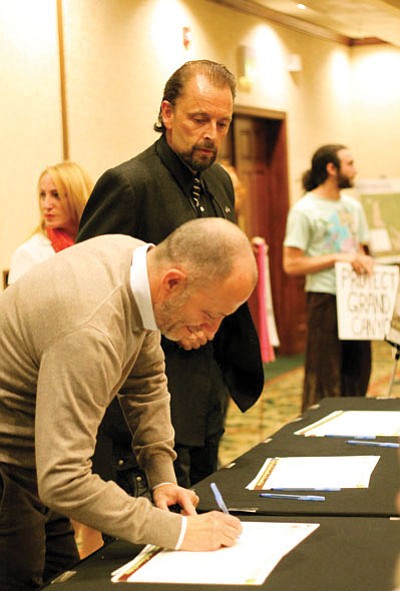 TUSAYAN, Ariz. - The U.S. Forest Service has collected the second largest amount of comments ever for a proposed housing and commerical development project on the Kaibab National Forest. The comments came during the public scoping period for the proposed access for road easements leading to future development sites outside of the town of Tusayan on the South Rim of Grand Canyon National Park.

"The closest that I could come up with was when the Department of Interior was working at the mineral withdrawal for the whole Grand Canyon region, we were a cooperating agency on that, but there was close to 300,000 comments on that," said Jacqueline Banks public affairs officer for the U.S. Forest Service at the Kaibab National Forest.

While the majority of the 200,000 letters were form letters (52,000 letters from the Center for Biological Diversity, 55,000 from Earth Justice, 30,000 from the Sierra Club and 14,000 from the National Parks Conservation Association) the Forest Service received a petition with 50,000 signatures in opposition to the Stilo development and granting of the easements and another 1,500 unique (individual) letters.

"So you can see the vast majority of those were form letters, not that those aren't important because those give us a sense of community concern and where people stand, generally, on the issue," Banks said.

While most of the form letters received were not local, Banks said all of the letters have their own weight to add to the public scoping process.

"Receiving all of those (form letters) lets us know the level of controversy about the project," she said.

Most form letters were submitted through individual company websites where the common practice is for people to put their name to a letter which is then sent to the Forest Service.

"It is definitely not to say that those form letters aren't important, because they give us a sense of the level of controversy over a project and the level of community concern," Banks said. "So a lot of those form letters are going to contain the same issues because it's the same information. Then all those other ones then obviously there are potentially other issues that we will pull out."

Some of the form letters did have unique content which could include a paragraph or sentence addressing specific issues or topics.

"It's a big process for us go through and be able to pull out all of those issues," Banks said.

"The NEPA (National Environmental Policy Act) process is not a voting process," she said. "What our role is now is to go through all of those (comments) and pull out issues to be analyzed as part of the environmental review."

The Forest Service's defines an issue as a point of disagreement, debate or dispute on a proposed activity based on some anticipated effect.

"An issue is this whole idea of cause and effect," Banks said. "So if this action were to occur, we are concerned about these potential effects. Those are the things that we would then be pulling out to analyze more in-depth as part of the environmental review."

After the Forest Service reviews the remainder of the comments and has identified what issues have been raised, the next step will be to determine whether the review will be an Environmental Assessment (EA) or an Environmental Impact Statement (EIS).

"It is up to the line officer, in this case the Kaibab National Forest Supervisor, to determine which issues will be part of that environmental review," Banks said. "Depending on those issues that are raised, that's that whole question whether this will be an EA or an EIS."

Acting supervisor for the Kaibab National Forest Bill Westbrook will decide whether the environmental review will be an EA or an EIS. Based on his decision, the Forest Service will be able to determine how in-depth of a review it will be.

Of the two, an EIS is the more extensive and lengthier process.

If the project is determined to be an EA it does not have to stay an EA since the Forest Service can change its mind and make the review an EIS if it is deemed necessary.

"At the point at which you say, 'wow, there are going to be significant effects,' we could still go over to an EIS," Banks said.

Once the review is determined to be an EA or an EIS, the Forest Service will conduct the review and be able to say whether the easement application is approved or not.

"Basically, our decision is to either approve easements as the town of Tusayan have proposed them, to approve them with modifications or to deny the easement as proposed, which would leave access to the private parcels as they currently exist," Banks said.

According to Banks the public scoping process plays an extremely important role in helping determining the outcome of how extensive the review will be.

"Scoping is such an important process for the Forest Service, for any proposed action that the Forest Service does, we take that into consideration, that is required of us," Banks said. "For us public scoping is critical and we really wanted to allow that time for that process."

The Forest Service has posted all of the comment letters to their website, where they said the public is welcome to read through them.

"You can read every comment that every person has submitted," Banks said. "We thought that would be important because not only did we want and need to review those but we wanted people to be able to, if they wanted, go in and see what other people had to say."

The Forest Service expects to have the comments sorted and a decision reached within the next month.