In search of the Mojave Desert tortoise 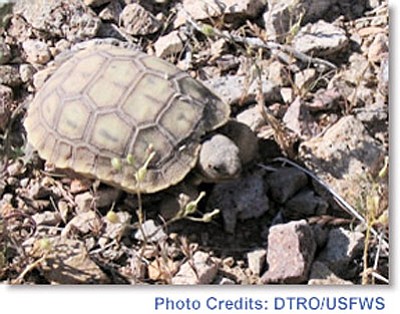 GRAND CANYON, Ariz. - Mojave Desert tortoises, may inhabit only a minimal part of Grand Canyon National Park but they have earned themselves a place on the endangered species list as a threatened species.

Since their listing in 1990, the resiliency of the Mojave Desert tortoise has been tested and those who protect the species continue to monitor its habitat and population.

While most of the tortoise's habitat is in California, Nevada and Utah, a small portion have been found on the north side of the Colorado River in the Grand Canyon.

A large stretch of the Mojave Desert lying north of the Grand Canyon and reaching to Lake Meade through the Grand Wash is also part of the range area for the tortoise.

"When we say north of the Grand Canyon, we are talking in the Grand Canyon Parashant National Monument, which is a very remote area," Wooldridge said. "The Hualapai reservation is on the south side of the (Colorado) River and Grand Canyon National Park (GCNP) is on the north side of the river, up to about Pearce Ferry where it meets up with Lake Meade National Recreational Area. That would be where records of the desert tortoise occur in GCNP."

Because it is such a small area of the park, Wooldridge said the tortoise does not face a lot of issues within that area.

However, in other parts of the tortoises' range areas, they continue to face serious threats, including wildfires, unauthorized OHV (off-highway vehicle) use, illegal collecting, drought, non-native plants, development, livestock grazing, death from paved roadways and disease.

The threats to the species were first noted during monitoring efforts by researchers conducting research to local tortoise populations.

After noticing a decline in its numbers around 1989 and 1990 the FWS completed a full evaluation of the entire population and the Mojave was officially listed as threatened under the California Endangered Species Act.

Today it is considered a species at risk under California's Wildlife Action Plan (Bunn et al. 2006), according to a 2012 Species and Critical Habitat status report.

In 1994, around 6.4 million acres were designated by FWS as critical habitat for the Mojave Desert tortoise in areas west of the Colorado River and in southwestern Utah, southern Nevada, southeastern California, and northwestern Arizona.

Today, the California Department of Fish and Game manages over 48,000 acres of land for the conservation of the desert tortoise and additional lands acquired as mitigation for projects that result in impacts to the species.

"They are the lead for monitoring and recovery planning," Wooldridge said. "We have five recovery units throughout the range in Arizona, California, Nevada and Utah."

According to Wooldridge the Mojave Desert tortoise is still declining in numbers today.

"The last seven years of monitoring data have shown a downward trend in population numbers in four of our five recovery units," he said.

FWS do not have a definite answer as to why the numbers are declining and attribute it to continued threats to species.

"Since they've been listed, we've been very heavily involved in recovery actions - what we need to do to recover the tortoise," Wooldridge said. "To get it off the endangered species list."

To have the tortoise listed as threatened or endangered or taken off the list altogether, is determined by a review conducted every five years by the FWS.

"Once a species is listed, every five years we are supposed to review its status and say, for example, 'Nothings changed, leave it as is things are looking better' or we say, 'Things are getting worse, we are recommending up-listing from threatened to endangered,'" Wooldridge said.

The five-year review to re-evaluate the Mojave's status is due sometime in the next two years.

Preservation and recovery of the tortoise have been carried out throughout its range areas.

In parts of California and Nevada, livestock grazing has been removed from public lands and OHV use has been restricted and any potential developments in the tortoises' range areas are first required to talk to the FWS in order to ensure they will be in compliance with the Endangered Species Act.

Additionally, there have been wildfire suppression and habitat restoration projects to recover burned areas as well as invasive species management to reduce grasses that have caused fire related issues.

The Mojave Desert tortoise is found from near sea level to around 3,500 feet in elevation.

It can live up to 80 years and weigh between eight to 15 pounds and while some have mistaken the Mojave Desert tortoise for its more familiar cousin, the Sonoran Desert tortoise, they are two separate species.

According to Wooldridge the Sonoran and the Mojave were classified as the same species up until about five years ago. After the research confirmed it, a genetic paper was published verifying they were two separate species.

"We suspected they were different," Wooldridge said. "But to have a Sonoran and a Mojave Desert tortoise in hand, you really can't tell them apart."

According to the FWS most desert visitors will very rarely get a glimpse of the Mojave Desert tortoise.

While the Sonoran tortoise is well populated and adoption events are held often, the Mojave Desert tortoise is rarely adopted and in Arizona there is no adoption program for them.