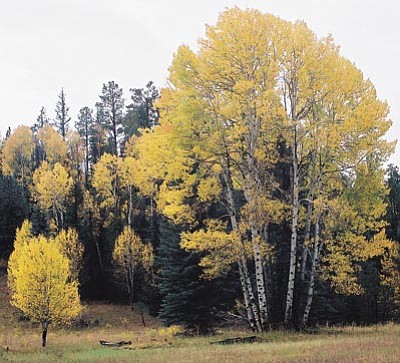 FREDONIA, Ariz. - Throughout the fall and winter months the north zone fire managers on the North Kaibab Ranger District and the North Rim of Grand Canyon National Park plan to conduct the prescribed treatments on up to 9,200 acres.

This season's planned treatment areas will include six separate areas.

Tipover East Prescribed (Rx) Fire: The total Tipover East project area is 10,296 acres in size, but the entire project area will not be burned at once. Fire managers have divided the project area into separate burn units that will be treated over the next three to five years. Their focus is approximately 3,000 acres this season.

The North Rim Slopes Rx is located both within and adjacent to the Tipover East project area.

Vegetation in both the Tipover East Rx and North Rim Slopes Rx project areas include first-entry mixed conifer, which in this case means the area has not seen fire disturbance in more than 100 years and contains above average fuel loads potentially posing a higher risk of a large-scale wildfire.

"Factors like heavier fuels, lower canopy base heights, and increasingly heavier tree densities of small- diameter trees (less than 6 inches) makes first-entry more challenging," said Ed Hiatt, north zone fire management officer. "This is why prescribed fire implementation is so critical. As fire managers we need to take advantage of the winter-weather opportunities Mother Nature gives us so we may use prescribed fire to ward off the potential devastating effects that a larger, high-severity wildfire could bring to our doorstep. We don't want a wildfire to get started in areas like this during the peak of a hot, dry summer month because the effects would be highly undesirable."

"Portions of the Jacob Ryan North project area have been logged prior to the prescribed burn resulting in current fuel loads that are lower than other first-entry prescribed fire burn units here," said Dave Robinson, north zone fuels specialist. "This pre-burn logging activity is a valuable tool in helping to reduce the risk of future catastrophic wildfires because when used in combination with prescribed fire the risk of future high- severity wildfires is greatly reduced."

Miscellaneous Prescribed (Rx) Fire Piles: There are approximately 500 acres of piles located throughout the North Kaibab Ranger District. Piles are constructed by hand or machine and are a result of fuels reduction treatments. These piles are composed of vegetative materials, commonly called slash, such as: tops, limbs, branches, brush and other recently cut miscellaneous materials resulting from forest management activities such as thinning, pruning, timber harvesting and wildfire hazard mitigation. After arranging slash into compact, teepee-shaped piles and allowing the piles to dry, fire managers will burn the piles during safe burning conditions, generally after snowfall or significant wetting-rain events.

Prescribed fire and wildfires are managed for multiple objectives and mechanical thinning and logging are tools fire managers use to reduce fuels that could potentially contribute to more destructive wildfires. Planning efforts for prescribed fire operations start many months or even years before fire is ever put on the ground. Fuel loads and fuel moisture data is collected, burn plans are written and coordinated with all cooperating agencies and specific procedures are followed when determining what areas of the forest to treat, how much to treat and when to do so.

During prescribed fires, forest visitors are cautioned that smoke may be present in short durations, which may impact roads and populated areas. The public is reminded to use caution, drive slowly, turn on headlights and avoid stopping in areas where fire personnel are working.

All prescribed burning on the Kaibab National Forest is subject to approval by the Arizona Department of Environmental Quality (ADEQ) and appropriate weather conditions.