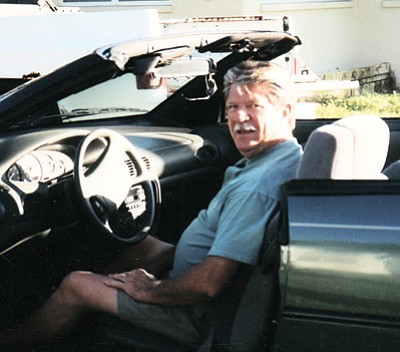 John Patrick Noon Sr., 77, passed away at home in Melbourne, Florida Oct. 23. He was a long time resident of the Tusayan - Grand Canyon Community.

To his friends he was known as Pat or JP or simply Noon. He was born in Johnstown, Pennsylvania March 17, 1938 and graduated from Johnstown High School. After high school he enlisted in the United States Air Force and received an honorable discharge after serving four years.

He went on to work for Bell Helicopter International out of Fort Worth, Texas spending much of his employment overseas. Upon his return to the United States, he accepted an offer to work for Grand Canyon Helicopters (Papillon) in 1979 and remained with the company for many years working at the Grand Canyon and in Hawaii.

Pat left the area in 2004 to relocate to Florida for personal health reasons and to assist his sister Lorraine. Pat was renowned for his great sense of humor and incredible stories. Always a familiar face and greatly respected throughout the community, Pat was greatly missed when he left the area.

He was preceded in death by his parents, Harry and Rosalia Noon, brother Robert Raymond and sister Lorraine. He is survived by brother Harry Jr. and family in Johnstown, Pennsylvania. His sons John Patrick Noon Jr. of Flagstaff and son Gary Hunter and family of Tampa, long time friend and caregiver Sandy Grugan and husband Rod along with the many friends he cherished.

A final party in honor of "JP" Pat Noon is planned for late spring or early summer of 2016 in the Tusayan - Grand Canyon area. An announcement will be published prior to the event.