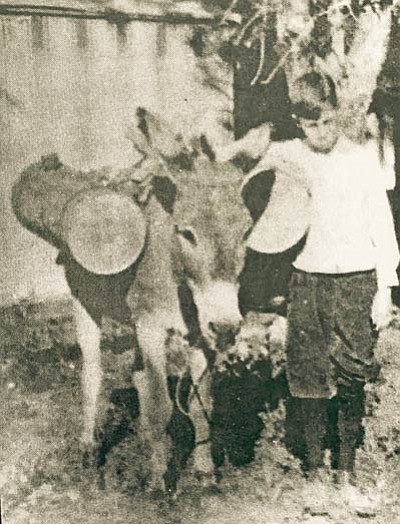 GRAND CANYON, Ariz. - Everyone has skeletons in their closets. Typically, the longer you're around the more you accumulate. Grand Canyon is no exception and with the help of a few friends, the News found several interesting stories and legends in the archives at Grand Canyon National Park.

According to the legend, a marker located in a grove of trees just off of the parking lot of the El Tovar Hotel bears the name Pirl A. Ward and a death date of 1934. The stone looks exactly like a tombstone and has led to folklore that it is the grave of a Harvey girl who came to a bad end. According to the legend, a black shrouded figure can be seen hovering around the marker at night.

However, the truth behind the marker is less exciting.

In reality, it is not a grave and Pirl Ward was actually a man.

Ward was the contractor who built the El Tovar Hotel between 1904 to 1905. Born in Peabody, Kansas in 1879, Ward eventually moved west and had a carpenter shop in Winslow, Arizona where he met his wife, Lillian Williams.

He died in 1934 and was buried in Artesia, California, however, the myth remains surrounding Ward's last resting place - outside the El Tovar Hotel.

Apparently upon his death, El Tovar decided to place the marker by the hotel in his memory. He is not buried under the stone marker, which is located in the vegetation in the middle of the El Tovar and Hopi House parking area.

Legends - death on the North Rim

According to A.E. DeMaray, Brighty, the burro of storybook fame, came to a tragic end that many may not realize.

Brighty was a beloved burro that roamed the Canyon for over 20 years, sometime between 1892 to 1922. He was given the name of Bright Angel for the creek where he spent winters, but everyone called him Brighty. Most of Brighty's summers were spent on the North Rim, where he helped carry water from a spring to visitors on the rim.

Even though he was a wild burro, Brighty loved children and often let them ride on his back. It is also said that Brighty was the first animal or person to cross the new bridge at the bottom of the Canyon. He also met President Theodore Roosevelt.

Brighty's life was chronicled in the popular children's book "Brighty of the Grand Canyon" and later a movie with the same title. But there's one little known or talked about fact about the little burro.

It was December 1922 and it was a particularly rough winter on the North Rim. A thief was escaping into the Canyon and happened across Brighty, who he befriended and followed during his escape up the North Rim.

At the rim they were met with a ferocious blizzard but they pushed on and found a small ranch house that they were able to break into.

Several hours later an unfortunate traveler, also caught in the blizzard, came across the same cabin. The thief would not let him in, guarding the door with an axe and stating there was only food enough for one person. The traveler, who's feet were badly frozen,, brandished a Bowie knife and demanded entrance. The thief finally relented.

For three months the two faced each other with their axe and knife - the snow piling higher until it was 15 feet deep.

By March, there was still 12 feet of snow on the ground. The men had rationed out their food, stockpiling a small amount so they could make a break for it and the little food they had ran out. Brighty, still with the men, was sacrificed to keep them alive.

That March, they decided to take their chances. The thief went ahead, promising to send back help for the traveler, but the traveler, not trusting the thief took off for Uncle Jim's cabin on the way to Fredonia. His severely frostbitten feet were deteriorating and by the time he made it to the cabin his bones showed forth, the flesh having sloughed off after freezing.

He was later taken to St. George where both of his feet were amputated.

The thief went another direction and was never heard from again.

Facts - skeletons in your garage?

According to an article by Allyson Mathis, in 1928 Glen and Bessie Hyde attempted to make the fastest trip down the Colorado River on their honeymoon and went missing. In 1977, a skeleton with a gunshot wound to the head, was discovered in the garage of the recently deceased Emery Kolb.

The skeleton was stored in a boat in the rafters of the garage, wrapped in a canvas body bag.

Kolb was part of a coroner's jury at Grand Canyon and had collected the skeleton in the mid to late 1930s near Yavapai or Shoshone Point.

Stories began circulating that it was the remains of Glen Hyde. While the myth prevailed, it was not proven.

In 2008, Bob Williamson, a retired U.S. Forest Service director of range management in the Supervisor's Office in Washington D.C. donated 500 photos that had been kept by his father during his time at the Grand Canyon in the 1920s and '30s. In 2008, with the help of these photos, criminal investigator, Joe Sumner had a breakthrough in the cold case of the skeleton in Kolb's garage. Sumner worked with the park to match the skeleton with a photo and helped identify the skeleton as an unidentified suicide victim - possibly a miner.

However, some still speculate that it is a cover up and the skeleton is that of Glen Hyde.

The Canyon holds many mysteries. Some that may never see the daylight and others that we will be left to wonder about.