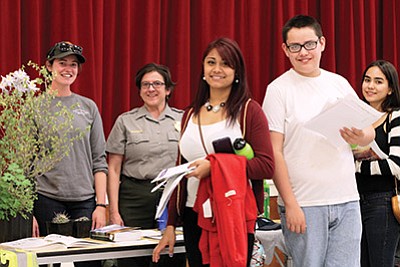 GRAND CANYON, Ariz. - Cassidy Free and Judith Ruiz, both freshman at Grand Canyon School (GCS) are planning on spending their summer earning money. It will be the first time either of the girls have worked and after attending the job fair at GCS April 6 they have a better idea of what kind of job they want to do.

"I think that Xanterra is the most interesting job (opportunity) right now because they have a lot of jobs to offer like being a host or receptionist," Ruiz said.

Free said she is leaning toward working with the Youth Conservation Corp (YCC) because they hire at 15 and she wants a job where she will be outside.

"I like plants and animals, so that's a good one for me," she said. "All summer long you're actually doing physical activity, that's a good job for people who are outside workers."

Both girls aren't committing just yet and said they planned to fill out applications and had already given their resumes to various vendors.

"They're all very interesting," Ruiz said.

Tom Rowland, principal at GCS, said the goal of the job fair was to provide information and job opportunities for students who want to work in Grand Canyon or Tusayan this summer.

"The support we're getting from the vendors in the area, who help these students through the summer time, is just great," he said. "Most of these (jobs) are from now until Labor Day because that's the busiest time at the park. They need these students to help with that. It's a great opportunity, nearly every student here will end up doing something in the park."

"This introduces them to all the different events going on," Rowland continued.

Ruiz and Free agreed that as first time job holders the job fair was an immense help in navigating job options.

"I didn't know about all these jobs," Free said. "We just found out about a lot of jobs we had never known about."

"It's very helpful," Ruiz agreed. "They should do it every year."

"Many of the businesses and organizations received quite a few applications and talked to most of the students," said Andy Pearce, environmental education specialist at Grand Canyon National Park.