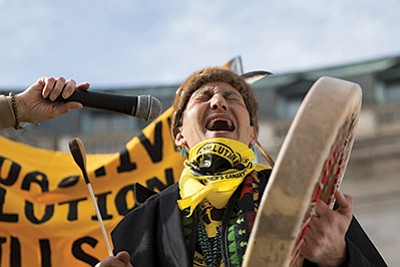 Klee Benally of the Navajo Nation sings as part of a protest outside the EPA over pollution from uranium mines. Photo/Danika Worthington, Cronkite News

WASHINGTON - Longtime Sanders resident Wayne Lynch was told in July that the water on his ranch contained dangerously high amounts of uranium, yet he is still using it.

Lynch said the problem extends to the Sanders community, including nearby schools, which have no choice but to use contaminated wells.

"People are always getting cancer," he said, naming his mother, an aunt and a grandmother among those who have been diagnosed with the disease.

Lynch's case was just one of the stories brought to Washington last week by Clean Up the Mines, a group that highlights the detrimental effects of abandoned uranium mines, especially those on and near reservations.

According to government data, there are about 15,000 uranium mines in the West, with 75 percent of those on federal or tribal lands.

Clean Up the Mines was in the District for a week, working to spread awareness of what it calls an environmental crisis. That included a protest outside the Environmental Protection Agency building.

The group demanded that the federal agency conduct studies on radiation levels in water supplies and move to clean up uranium waste. Group members met with about 10 EPA officials after their protest.

"They listened to our frustrations," said Tommy Rock, a member of Diné No Nukes.

"They didn't really say much - they just listened to us," he said.

It was Rock, a doctoral candidate in environmental sciences at Northern Arizona University, who tested the water near Sanders and found uranium levels of 47 parts per billion - well above the legal limit of 30 parts per billion.

The Sanders Unified School District draws water from wells where uranium levels have been tested at 37 parts per billion - forcing the district to rely on bottled water for its offices, schools and teacher housing, said interim Superintendent Dan Hute.

"There is uranium. It is over the limit. It's been a mess," Hute said.

Except for the occasional donation, bottled water costs come out of the district's budget. Hute said the district drilled a new well, but it tested at about the same level of uranium as the old one. He said the school facilities board is considering a filtration system or a deeper well - but that could cause more problems because of arsenic levels in the area.

Hute is frustrated by what he sees as a lack of response by government agencies.

"All they're doing is talking about this," he said, "but nobody is bothering to call my office. It's all being dumped in our laps."

Apache County Director of Public Health Chris Sexton said the state health department conducted a risk analysis for personal health effects from water contamination in the Sanders community, which he said has been an issue for the last year.

"They advised small children not to drink the water or mix it with formula," he said, but the department concluded that adults were not at risk.

An Arizona Department of Health Services spokesman confirmed that children under age 1 should use an alternative water source for drinking and for formula, but adults are not at risk if they drink the tap water.

In a written statement, an EPA spokesman said the agency has already spent more than $100 million to address the highest-risk areas under a multiyear plan developed in 2007 to address uranium contamination at mining sites.

"The federal effort has focused on identifying the most imminent risks first by addressing contaminated structures, water supplies, mills, dumps, and mines with the highest levels of radiation," said the statement, which added that the agency continues to work on the issue.

A statement from the EPA's regional office, meanwhile, said it has been working since last year to fix the problem of tainted water that is being delivered in Sanders by the Arizona Windsong Water System.

It said the Arizona Department of Environmental Quality has given the water system until April 1 to bring quality into compliance with the 30 parts per billion standard, while the Arizona Corporation Commission last month terminated the system's certification, clearing the way for another supplier.

"Efforts are underway with various stakeholder agencies to facilitate a change in water supplier for the residents of Sanders, Arizona," the statement from the regional EPA said.

In the protesters' meeting with EPA officials in Washington last week, Rock said he presented some of his research, urged the agency to include Sanders in its next five-year plan, and asked that provisions protecting communities from uranium waste be included in the Clean Water Act.

Charmaine White Face, a scientist and member of Clean Up the Mines, said her Oglala Sioux community also experiences high cancer rates, and that she has found water supplies on her chapter's land with dangerous uranium levels.

White Face said her father died of cancer, and both she and her daughter have battled the disease. She said her son is dying of lupus, another disease linked to radioactivity.

But, she said, the federal government has failed to respond to what she sees as a health crisis.

"I've been dying to wake everybody up," she said. "I can't get anybody to listen."

She said part of the problem are laws that do not hold mining companies responsible for cleaning up their sites when they abandon them.

The Clean Up the Mines protesters said they delivered a letter to the EPA from Lynch, who hopes it will convince the agency to do more testing in his community and consider drilling new, deeper wells that would bypass the aquifer that holds the contaminated water.

White Face said they will continue to spread awareness of the problem and press for change.

"We are not just victims," she said, "we are survivors. And we are still resisting."