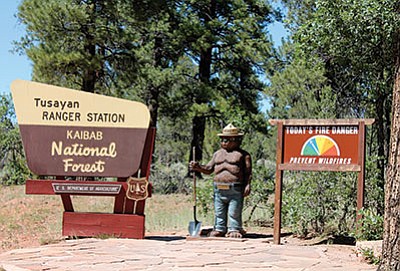 Kaibab National Forest denied the town of Tusayan's road easement application to the Ten X and Kotzin Ranch properties. Approval of the easements had the potential to allow road access to a future development by Stilo Development U.S.A. Loretta Yerian/WGCN

TUSAYAN, Ariz. - On March 4 the Kaibab National Forest (KNF) notified the town of Tusayan that its application for road and utility easements on National Forest land is being returned and will not receive further evaluation and processing.

According to a letter to Tusayan Mayor Craig Sanderson signed by Kaibab Forest Supervisor Heather Provencio, the proposed project does not meet agency requirements for initial and second level screenings and is being returned to the town, because the Forest Service may not process such an application for authorization.

KNF has been working to address Tusayan's application for authorization to improve and maintain roads on National Forest System land and to install various utilities.

The roads and associated infrastructure would provide improved access to the Kotzin and Ten-X Ranch properties and would allow significant residential and commercial development. The first step in that process was to notify potentially affected federal, state and local government agencies and the public of the proposal and to provide them an opportunity to comment.

"Based on the comments received, and considering the other information I have regarding the proposed project, I have decided to reconsider application of the screening criteria to the proposal," Provencio wrote in the letter to the mayor.

"Based on information received in the record, I have determined that the Tusayan proposal is deeply controversial, is opposed by local and national communities, would stress local and Park [Grand Canyon National Park] infrastructure, and have untold impacts to the surrounding Tribal and National Park lands," Provencio wrote.

The letter advised that if another application were to be submitted, it should address the specific concerns and criteria outlined.