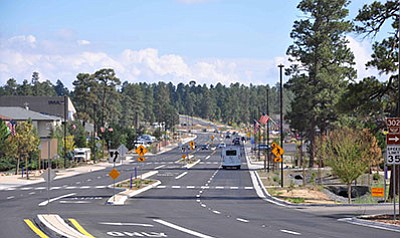 The town of Tusayan and Stilo Development hoped the Forest Service would grant a road easement request to build housing and a large scale commercial development. The Forest Service denied the application. Photo/Grand Canyon Chamber and Visitors Bureau

TUSAYAN, Ariz. - Town of Tusayan officials and Stilo Development Group USA representatives are reeling after the Kaibab National Forest announced March 4 that the town's application for road easements across Forest Service land had been rejected.

Forest Supervisor Heather Provencio announced her decision to reject the proposal for road easements across Forest Service land during a conference call with members of the town council and representatives of Stilo Development Group USA.

Provencio said four of nine criteria were not met in the initial screening process and said there was no way she could move forward with the application, much less the National Environmental Policy Act (NEPA) process.

"I looked at all nine (criteria) but four stood out as 'hey, we are not passing these criteria,'" she said.

Additionally, Provencio said the criteria are screening criteria for accepting proposals, not for starting NEPA.

The town of Tusayan needed the easements to be approved to gain access to land on which they wanted to build affordable housing parcels. Approval of the easements would also have allowed Stilo to move forward with plans to build a major commercial development on the same properties.

In the past, Stilo representatives said the proposed development could include hotels, restaurants, retail, entertainment and educational attractions.

Andy Jacobs, a representative of Stilo, said Stilo did not expect the decision March 4 and were surprised by the outcome.

"We weren't expecting a decision, it was quite surprising that the application that the Forest Service approved about a year ago is now not approved," he said. "We are taking a look at some of the reasoning and deciding what our next options are. I don't think we know at this point what we're going to do from here."

Jacobs said it was a big blow for the town. Tusayan Town Manager Eric Duthie agreed.

"We are surprised at the decision of the Forest Service, we're disappointed that the Forest Service would not honor their commitment to the application process," Duthie said. "For a year they've told us the process is in place, the process will work and now they return it to us and say, 'oh no, not really.' Obviously it creates a high level of concern for what we can do for our own residents who are still denied an opportunity to own a home."

Duthie said the town was led to believe that the NEPA process would take place and was shocked that the Forest Service would not give the town the opportunity to address concerns brought up in the letter Provencio provided to the town when she rejected the application.

In her letter Provencio provided specific agency requirements that the town's application failed to meet in its initial screening and said the proposal was inconsistent with the Kaibab Forest Plan. These inconsistencies include: the proposed use would not create an exclusive or perpetual right of use or occupancy, the property should not unreasonably interfere with the use of adjacent non-National Forest System lands and that a proposal must be rejected if the proposed use would not be in the public interest.

Provencio said approving the easement would not have been in the public interest.

"Our forest plan talks about taking an 'all lands' approach, working closely with partners across administrative boundaries. In this case I was looking at the tribes. And the park very clearly told me there could be substantial adverse effects to their lands. Right there I went, 'well, I'm not sure if it's consistent with our forest plan,'" she said. "It's one thing if you're talking about an inholding with a handful of homes, that isn't necessarily exclusive use but if you're talking a very large development then it creates, potentially ... a use that would have to go on into perpetuity. Given the concerns by the tribes, the park (and) the public over how far that development might go, I was worried that we might not meet that criteria (for not creating an exclusive or perpetual right of use or occupancy)."

Provencio said it was not a swift or hurried decision. After her October appointment as Forest Service supervisor of the Kaibab, she began briefing her employees, reading comments collected during public scoping and met with Tusayan and Stilo representatives and groups and individuals that the proposal would impact.

"I wanted to understand both sides of the issue," Provencio said. "As we summarized the comments I spent time going through those comments so I could understand affected groups and individuals were coming from. I spent what many would consider a long time coming to that decision."

Those in opposition to the development praised Provencio's decision and said it would help set precedent for protecting the area surrounding the Grand Canyon and other public lands.

"I think it really is a remarkable decision that I think caught most people by surprise," said Roger Clark, with the Grand Canyon Trust, an environmental advocacy group. "It really sets a new bar in protecting the Grand Canyon. By rejecting the proposed right away she spells out what the criteria are for any proposal like this and of this magnitude. She took it a step further and basically said, 'we're not even going to review this thing because it doesn't meet the minimum requirements of the public interest.' In a sense she's already found that this project poses significant impacts and has put the burden of proof back onto the developer to show why access across public lands is in the public interest."

Katie Davis with the Center for Biological Diversity (CBD) echoed Clark's remarks and said the decision was unexpected in its timeliness and ruling.

"I can truly say that we were pleasantly surprised. We often find ourselves fighting through many rounds of comments and challenging decisions after they are made, because we are up against well-established people with powerful friends - we had no reason to think this process would be different," she said. "It is clear now that we have smart people in the Forest Service who know that you don't always need to study something for years before you can say unequivocally that it's a bad idea."

Officials with Grand Canyon National Park did not respond immediately to requests to comment.

Discussions between Stilo and the town of Tusayan are underway to decide what the next course of action is and if they will submit another application.

"We all have the same basic goals. It's just the town's priority is housing and Stilo's priority is the project in total," Duthie said. "We just want to make sure that we're not doing anything that bothers either one of us. So we are going to have that discussion and see what options are out there."

Duthie said the town has not given up on affordable housing in Tusayan and said the next step is to figure out how the process could be stopped after it was started. Duthie said nothing is set in stone on what this could mean for housing or the development and said discussions with Stilo will need to be had before they can say what will happen next.

"From the Tusayan housing standpoint, this is a shock and surprise and an extreme disappointment," Duthie said. "We are really surprised that the Forest Service would decide this, take nearly a year, leading us on the entire time to come to a decision that they decided to go back and look at the rules and change them. It doesn't make sense."

In her letter, Provencio advised that if another application were to be submitted, it should address the specific concerns and criteria outlined.

If a new proposal is submitted individuals and groups have said they will continue to fight and oppose it.

"We have been unyielding in our fight to stamp out any threat to the water and wildlife of the Grand Canyon region and we will not let up," Davis said.