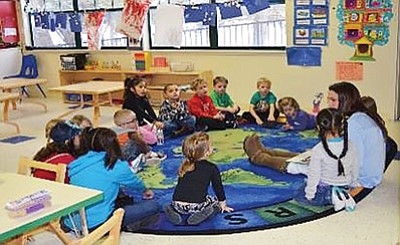 Starting May 30 - July 28 KLC will offer a full time and part time summer camp for children from Grand Canyon, Tusayan, Valle and all visitors to the Canyon.

KLC has more than 20 kids signed up for camp, which kicks off the week after Grand Canyon School (GCS) gets out for the summer and wraps up the week before student's go back to school.

Michelle Pahl, director at KLC, said the camp offers a chance for children ages five to 12 years old to have fun and be involved in educational field trips and lessons over the summer.

"We have a different theme and sport every week," she said. "We're just mixing it up. It's like, 'why do the same thing every day?'"

The camp is held in the afternoon, while mornings will focus on academics. Camp is at KLC, with field trips taking place around Grand Canyon.

Camp kicks off May 30, with Patriotic week, in celebration of Memorial Day.

"I have a veteran coming in as guest speaker," Pahl said. "He's in the American Legion."

For every week of camp, Pahl has guest speakers and field trips lined up to correspond with the theme of the week.

Pahl said because summer camp is an important part of most kid's summers and KLC doesn't want any child to miss out because they can't afford it, she is reaching out to community members and local businesses for scholarships.

"We are looking for people and businesses to sponsor kids," she said. "The more kids we can get full time would be great."

If parents can't afford all nine weeks of camp or want to pick and choose certain weeks for thier child to attend, KLC said they have part time rates available.

"Even if kids get a month in or a week, it's better than nothing," Pahl said.

As part of KLC's agreement with the town of Tusayan, Tusayan residents and employees receive 10 percent off KLC tuition, which can be applied to summer camp costs.

If a business gives a scholarship, sponsors can specify if they want their scholarships to go toward its employee's children.

"If you want to use it for your employees, by all means. There's no specific," Pahl said. "To me kids are kids, we're open to who we're giving scholarships to."

"It's going to be an awesome summer, so much fun," Pahl said. "We've got great teachers coming aboard for it and we've got curriculum planned for the summer. We're ready to go."

More information about scholarships or to make a donation is available from Pahl at (928) 638-6333 or at klccanyonkids@gmail.com.