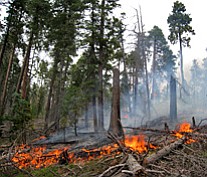 The National Park Service and U.S. Forest Service will initiate a series of prescribed burns on the North and South Rims.

The burns will be near the boundary line between the North Kaibab Ranger District of the Kaibab National Forest and the North Rim of Grand Canyon National Park.

Fire managers from the NPS and USFS will work together as the North Zone Interagency Fire Management Program on the burns.

The South Rim Fire Management Program is also planning a prescribed fire treatment this fall working with the Tusayan Ranger District of the Kaibab National Forest.

This entire burn unit is approximately 10,300 acres in size and will be treated in a multi-year implementation approach. The number of acres treated will vary from year to year. The Tipover East Rx includes previously untreated areas (first-entry) and areas that have experienced fire in the recent past. The area is comprised of mixed conifer forest and ponderosa pine.

Objectives of the Tipover East Rx include reducing hazardous fuels, returning fire to a fire-adapted ecosystem, and aid in protecting and enhancing Mexican spotted owl habitat.

Long Jim III Prescribed Fire (Long Jim Rx) burn unit is adjacent to the developed area on the South Rim and is 1,944 acres in size.

This burn unit is comprised of pinon, juniper, and ponderosa pine. Objectives specific to the Long Jim Rx include improving the defensible space in the Wildland/Urban Interface (WUI) within the South Rim developed area and returning fire into a fire-adapted ecosystem.

Fire managers are also preparing to burn piles of woody debris as weather conditions allow. On the South Rim, approximately 20 acres of piles are located on the south side of Center Road.

Smoke from prescribed fires will be most visible during ignition operations and will likely gradually diminish after ignitions are completed. Smoke may be visible along Highway 67 and 89A as well as from various locations on the North Rim and South Rim. Highway 64 East, also known as Desert View Drive, will most likely have heavy smoke impacts during ignitions and may require pilot car operations.

Prescribed fires play an important role in decreasing risks to life, resources, and property. Fire managers carefully plan prescribed fires, initiating them only under environmental conditions that are favorable to assuring firefighter and visitor safety and to achieving the desired objectives. Prescribed fire objectives include reducing accumulations of hazard fuels, maintaining the natural role of fire in a fire-adapted ecosystem, and protection of sensitive cultural and natural resources.

Visitors may see fire personnel, vehicles, and air support in the vicinity when any prescribed fire is being implemented. Please drive slowly, turn your lights on and avoid stopping in areas where fire personnel are working.