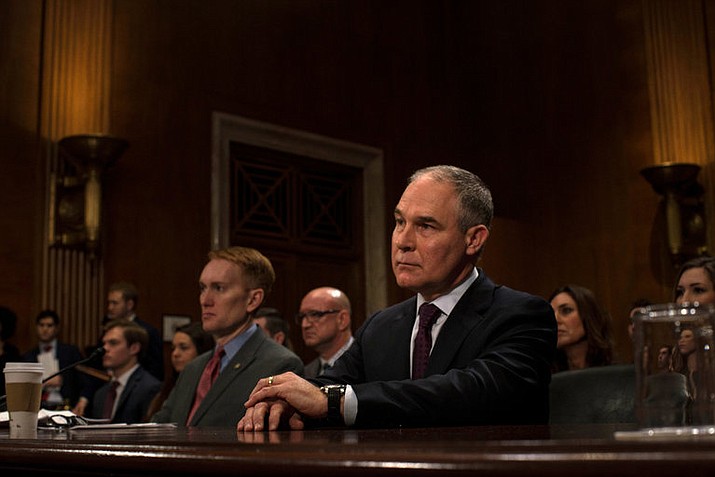 Scott Pruitt at his Senate confirmation hearing to head the Environmental Protection Agency.

The vote was largely along party lines, with two Democrats, Joe Manchin III of West Virginia and Heidi Heitkamp of North Dakota voting in favor of Pruitt, while Republican Senator Susan Collins of Maine voted against him.

Manchin and Heitkamp both represent coal-rich states, and Pruitt has a well-known relationship with fossil fuel industries. As Oklahoma Attorney General, Pruitt sued the EPA more than 15 times, often representing fossil fuel companies like Koch Industries. Pruitt also has been a vocal skeptic of climate change and has challenged the science linking it to human activity.

In a 2014 investigation, the New York Times found that energy lobbyists drafted letters for Pruitt to send, on state stationery, to the EPA regarding what they felt was economic hardship caused by environmental rules established under the Obama administration. Additionally, many of the coal, oil and gas companies represented by those lobbyists made large contributions to Pruitt’s attorney general campaign. Pruitt also worked jointly with those companies in filing multiple lawsuits against major EPA regulations.

Just prior to Pruitt’s hearing, Senate Democrats requested more than 30,000 emails from his tenure as Oklahoma attorney general amid concerns about his communications with fossil fuel industries.

“Mr. Pruitt has extreme environmental policy views. And he has zero experience running an environmental protection agency. In fact, he does not believe in the fundamental mission of EPA,” said Sen. Tom Udall, D-New Mexico. “Attorney General Pruitt made his name opposing EPA rules that protect human health and the environment, fighting against clean air and clean water, disregarding the science behind the EPA’s protections for human health and the environment, on behalf of for-profit special interests, not the public interest.”

Republicans, however, who have taken aim at the agency with the goal of modernizing it, applauded Pruitt’s confirmation.

“He’s exceptionally qualified,” said Senate Majority Leader Mitch McConnell. “He’s dedicated to environmental protection. And, as someone with state government experience, he understands the real-world consequences of EPA actions and knows that balance is the key to making policies that are sustainable over the long-term.”