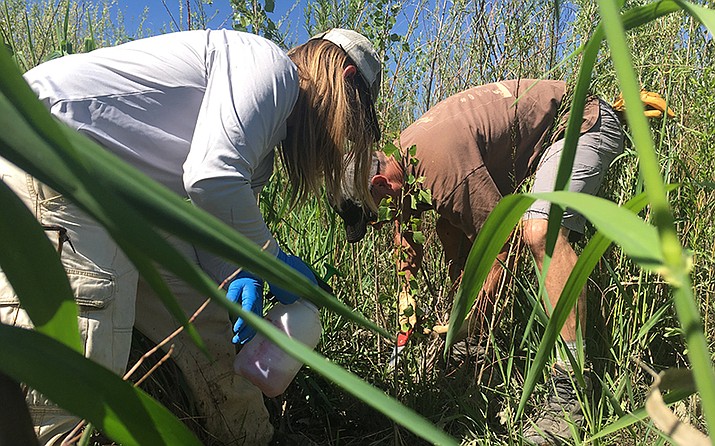 Volunteers with Wildlands Restoration Volunteers canoed to a small island in a pond in Longmont, Colorado, to cut down tamarisk and spray the remaining stubs with an herbicide. (Rae Ellen Bichell / Mountain West News Bureau)

LONGMONT, Colo. — About a dozen people crouched in the tall grass of an open field, moving slowly and deliberately through mud that squished underfoot. Some carried huge, serrated knives called hori-hori, a Japanese tool made specifically for weeding. Others wielded gardening shears, saws or chemical sprays as their weapons of choice.

Their enemy was the tamarisk, a tree with a prehistoric look — tall, with scaly leaves and tiny pink flowers. It looks delicate, but the kind of delicate that makes it indestructible, as if it might bounce right back up after a dinosaur stepped on it.

“We’re going to be going really slow with a fine-toothed comb and trying to find every single last tamarisk that we can,” said Jim Krick, a natural resources specialist with city of Longmont. “Every tamarisk that grows up into an adult plant is going to put thousands more seeds out there.”

Weeding projects like this one, organized by a group called Wildlands Restoration Volunteers, are happening across the West.

The tamarisk, which was brought to the U.S. from Eurasia in the late 1800s for erosion control, windbreaks and decoration, is much detested. Since its introduction, tamarisk — also known as salt cedar — has been blamed for choking waterways, hogging water and salting the earth as its range expands, driving out such native trees as cottonwood and willows. In Palisade, Colorado, a state lab is breeding beetles whose sole purpose is to destroy tamarisk. At one point, the University of Nevada published a poster about the plant titled WANTED — Dead, Not Alive!

“There’s been a concerted effort to demonize tamarisk,” said Matt Chew, a historian of invasion biology at Arizona State University’s School of Life Sciences. But he thinks this war is aimed at the wrong enemy.

The tree, he said, is a scapegoat for our struggle with something much bigger and messier than weedy fields: our relationship with water in the West.

The tamarisk has a reputation for hogging water – but is it warranted?

“This is one of the constant counts against tamarisk – that it’s wasting water,” Chew said. “That particular idea got started in the late 1930s and early 1940s for a very particular reason.”

Back then, Chew says, the Phelps Dodge Corp. wanted to expand its copper mine in Arizona, but it didn’t have the water it needed for the additional mining and processing. All the water rights to a nearby creek and river had been allocated.

“What they needed was an excuse to say there was more water in the rivers so that Phelps Dodge could have more water,” Chew said. “So, where are they going to get more water?”

Phelps Dodge inspected nearby water sources and found lots of tamarisk growing along the banks, Chew said. Mine officials rationalized that if they could prove the tamarisk was draining river water, he said, the mine could potentially get the rights to the “extra” water available by killing tamarisk.

“Phelps Dodge did a bunch of experiments which were later picked up by the Agriculture Department,” Chew said, adding that Phelps Dodge ended up getting its water rights through other means, but the tamarisk’s image was destroyed.

As Chew writes in the “Journal of the History of Biology,” “with water shortages, economic development during the Depression and copper mining for national defense during World War II, federal hydrologists moved quickly to recast tamarisks as water-wasting foreign monsters.”

Since then, researchers have shown that the tree doesn’t use more water than native riparian vegetation, including cottonwoods.

To make matters worse, big changes were occurring in the 1930s and ’40s in the way that water was being moved through the West. Dams and diversions were changing the patterns of flooding, patterns that used to be in sync with the reproductive cycle of more sensitive native plants, such as cottonwoods.

“To some extent, the way we were managing Western rivers actually created a giant tamarisk housing project,” Chew said. If the tamarisk is a monster, he said, it’s because we created it.

“If you want good, old-fashioned 17th-century riparian areas in the western U.S.,” Chew said. “You can’t take all the water out of the river. You can’t have big irrigated fields. You can’t have huge cities.”

Anna Sher, an invasive species biologist at the University of Denver and author of the book “Tamarix: A Case Study of Ecological Change in the American West,” agrees that Tamarix (the species’ genus) isn’t all bad.

Yes, Tamarix can create saltier surface soil that retards other vegetation, and its dense wood can fuel more intense fires. Sher even has heard that a boater drowned in Arizona because rescuers couldn’t get through the dense thickets of tamarisk crowding the shore in time to help him.

But, she says, “I certainly do not hate this plant.”

It provides nesting spots for the Southwestern willow flycatcher, for example, and she says it’s entirely possible for the trees to be a part of the landscape without completely taking over.

“It’s only behaving badly because of the way that we’ve managed our rivers,” Sher said.

Although the way we manage our rivers isn’t going to change anytime soon, Sher sees hope for restoring the landscape. It’s called the Field of Dreams hypothesis.

“The Field of Dreams hypothesis predicts that when you remove the invasive species, there’s an opportunity for the desirable species to come in,” she said.

Initially, Sher and other ecologists suspected the hypothesis was a pipe dream.

“But after doing surveys of hundreds of sites throughout the American Southwest, we can see that, on average, native species will come back and they’ll come back proportionally to how much tamarisk has been removed,” she said. “More tamarisk taken out, more native plants can come in.”

There are two conditions required for successful restoration. First, there has to be enough water in the rivers and streams to supply the new vegetation. Second, the public has to remain open to what native plants might come back. They might not be the cottonwoods and willows people hope for.

“It’s a new game now with Tamarix here and with the water needs that we have now,” Sher said, and humans will have to get used to plants that can handle the landscape as we’ve shaped it.

Those plants might be drought-adapted shrubs and grasses instead of picnic-worthy trees. And they will most certainly have a tamarisk or two as neighbors.

This story was produced by the Mountain West News Bureau, a collaboration between Wyoming Public Media, Boise State Public Radio in Idaho, Yellowstone Public Radio in Montana, KUER in Salt Lake City and KRCC and KUNC in Colorado.