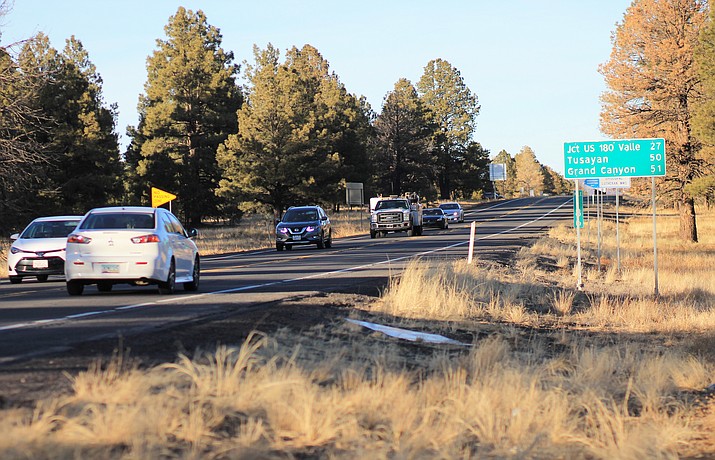 Vehicles stream down from the Grand Canyon on State Route 64. Local residents share the road with many of the 6 million yearly visitors to the Grand Canyon that travel the highway. The highway has seen several serious accidents in the past year.

TUSAYAN, Ariz. — After a series of fatal accidents earlier this year and several more over the years, Tusayan residents and council members expressed their concerns about the safety of one of the state’s most heavily traveled roads.

“I don’t know if people think the canyon closes at a certain time or what their concern is about getting up there so quickly, but it is not uncommon to see people doing in excess of 110 mph on highway 64,” he said.

ADOT recently completed a corridor study for SR 64. The study provided a strategic vision for assessing the overall health of the highway.

On the SR 64 corridor, the study found that freight index was the lowest performing area with 94 percent of the corridor in poor condition as it relates to bi-directional truck movement and delays.

Bridge condition, mobility and safety were the highest performing areas with 100 percent of the corridor in good condition for those measures.

According to Ryan Harding, public information officer for ADOT, safety was assessed by reviewing crash history over a five-year period, focusing on fatal and serious injury crashes and comparing that data to other state highway that are similar in overall operating condition.

“Our safety evaluation of the highway found that it performed better than average,” Harding said.

Residents of Tusayan, however, are getting tired of waiting. A group of town stakeholders traveled to Phoenix in April to address the ADOT board directly, asking it to consider including the road in its five-year plans.

ClayAnn Cook, manager of Big E’s Steakhouse, told board members at the April meeting that the restaurant has lost several employees to accidents along SR 64, including as recently as this spring. She appealed to the board to pay more attention to the toll such accidents have on the community.

During the Aug. 2 visit with ADOT Director John Halikowski and his staff, council member David Chavez said he was concerned about the negative impact the road conditions have on tourists heading to the Grand Canyon.

As a hotel manager, Chavez said he was concerned the negative impact on social media could hit the town’s bottom line if travelers decided not to make the trip. Chavez said one solution is to have four lanes, something that is not being considered by ADOT in the near term. And while State Route 64 is most heavily travelled during peak times from March through October, Halikowski said the department cannot build for peak flows to handle overall volume.

Halikowski acknowledged that a four-lane rebuild is the ideal long-term solution, but offered a number of near-term and intermediate solutions to curb some dangerous issues in the meantime.

Funding is also an issues, Halikowski said. Since the recession, Halikowski said ADOT has been working with approximately $0.43 of the dollars available in the past, with many challenges to address on the state’s highways.

The town agreed work on the next steps of determining a project manager, working with district to gather peak counts and other data, set target dates, and develop a “single ask” package to include addition of possibly nine additional passing areas, unique signage and traffic calming measures.