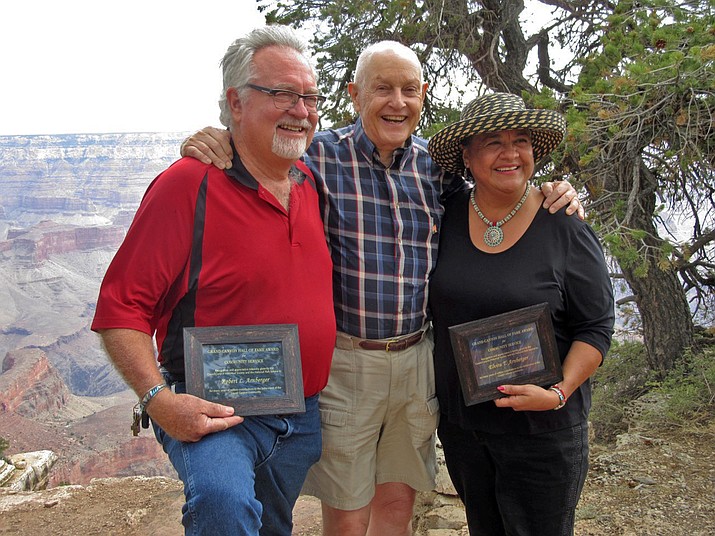 GRAND CANYON, Ariz. — Each year, the Grand Canyon Historical Society (GCHS) honors those who have contributed to the betterment of the Grand Canyon National Park and community through selfless service. The 20th annual Grand Canyon Hall of Fame Award, which is co-sponsored by the National Park Service, was presented to Robert L. and Elvira T. Arnberger July 7 at the annual GCHS picnic at Shoshone Point.

The award names two individuals who have given exemplary service to the Grand Canyon Community.  Recipients have made personal contributions of money, time, support, and/or work over a period of many years.

Rob Arnberger began his relationship with Grand Canyon National Park when he was born there.  He followed his father into the NPS and his career enabled him to return to the Grand Canyon in 1994 as superintendent, a post he held until he was promoted to Alaska Regional Director in 2000.

In spite of the demands of the job, Rob made time to support school projects and sports, efforts and activities of community organizations and the historic preservation efforts of the Grand Canyon Pioneers Society. Having been born at the Canyon, he has a keen interest in the history of the park, the community and the people who served and were involved in making that history.  The Grand Canyon Hall of Fame for Community Service owes its founding to his interest and support.

“It is only proper that his support and community service be recognized by the award he helped to create,” said GCHS president Al Richmond in a press release.

Richmond described Elvira Arnberger as the model for the Energizer bunny. During her time at the Canyon, Richmond said there was little she did not do to support those in need and to help make life better for the residents of the community.

Always interested in school activities, Elvira extended that interest to the safety of the children as a bus monitor.  She went a step further with the community, serving as a translator, mediator and advocate when needed in situations such as domestic violence. Coconino County Supervisor Paul Babbitt enlisted her aid as his community liaison and appointed Elvira to the Coconino County Board of Health, where she worked to create a walk-in urgent care clinic in Grand Canyon Village.

Within the community itself, Elvira lent her energies and talents to serving on the Board of the Grand Canyon Music Festival.  Richmond said she considers her best accomplishment to be leading and working with other community leaders to create the holiday food and gift drive for Tusayan and Grand Canyon Village to provide food baskets and toys to needy families during Christmas.

“Although Elvira arrived with her husband’s posting to the Canyon, she took to the community as her own and has more than earned this recognition,” Richmond said.

The Arnbergers’ names will be added to a plaque on permanent display in Shrine of the Ages.