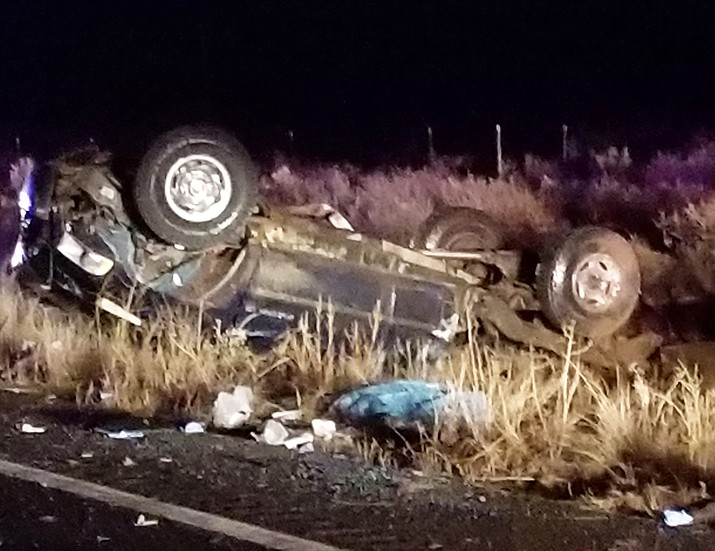 A head on collision on State Route 64 March 10 claimed the lives of two people and four more were transported to Flagstaff Medical Center with injuries. (Submitted photos)

A head on collision occurred March 10 north of Williams and south of Tusayan on State Route 64. (Submitted photos)

These two fatalities make seven lives the highway has claimed in the past four months. On Dec. 22, 2017, four people were killed and six people injured, including two children in a multi-vehicle accident at mile marker 207 on SR 64, and one week later on Dec. 28 another person was killed in a head-on collision at mile marker 191.

At 7:15 p.m. March 10, law enforcement and EMS providers received a call for a multi-vehicle accident on mile marker 215, between Valle and the Grand Canyon.

EMS personnel began triage of the patients. Guardian Medical began treating a 2 year-old boy with critical head injuries from the Nissan. Guardian medics transported the boy and his mother together to Flagstaff Medical Center, according to High Country Fire and Rescue Chief Robert Trotter.

Trotter said the driver of the Dodge pickup was pulseless and not breathing, and firefighters from Tusayan Fire Department began resuscitation efforts on the driver, who was later pronounced dead at the scene.

High Country personnel found the driver of the Nissan also with no pulse, not breathing and with massive head and chest trauma. The driver was killed upon impact of the accident and was pronounced dead at the scene.

A teenage passenger of the Dodge pickup was treated for moderate injuries.

All patients were ground transported by Guardian and Life Line Ambulance companies to Flagstaff Medical Center. Due to the weather conditions, air transport was not available.

According to an investigation by DPS troopers, the Nissan was attempting to pass traffic southbound in the northbound lane of SR64 and struck the Dodge pickup, which was northbound. DPS continues to investigate the accident.