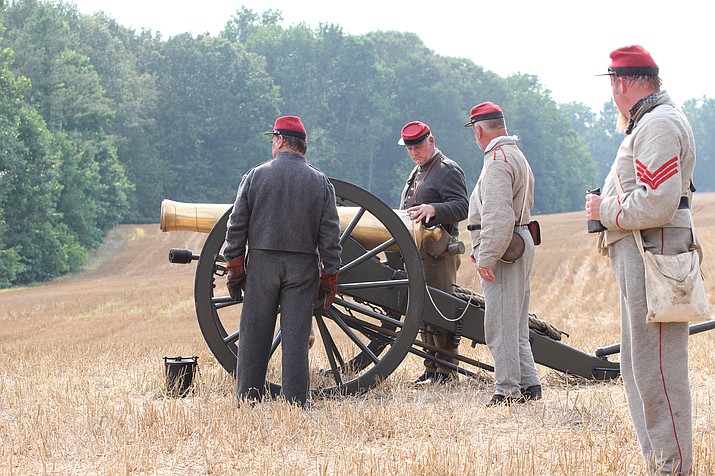 A walking tour and demonstration of the Confederate artillery position at the Poindexter Farm as part of the Battle of Malvern Hill. (Photo/NPS)

RICHMOND, VA. — On June 2-3, Richmond National Battlefield Park invites the public to explore the history of Cold Harbor, site of the famed 1864 battle that one soldier described as “simply a butchery.” This year’s event features living history demonstrations, children’s activities, an evening candlelight tour on June 2 of the battlefield, and a presentation by renowned historian Gordon C. Rhea.

Rhea, author of numerous critically-acclaimed books and articles on the Civil War, will discuss the Battle of Cold Harbor and the actions of the Union and Confederate armies following General Ulysses S. Grant’s ill-fated assault on June 3, 1864.

WASHINGTON — The Department of the Interior today announced the selection of the “Hopewell Ceremonial Earthworks” in Ohio—a group of ancient American Indian sites including both Hopewell Culture National Historical Park and related properties owned by the State of Ohio/Ohio History Connection—as a proposed nomination by the United States to the World Heritage List.

The list recognizes cultural and natural sites of universal importance such as the Grand Canyon in Arizona, the Taj Mahal in India, and the Galápagos Islands in Ecuador. There are 1,073 sites in 167 of the 193 countries that have signed the World Heritage Convention — including 23 World Heritage Sites in the United States.

More than 2,000 years ago, the American Indian people of the Hopewell Culture constructed the Newark Earthworks Octagon around the moon’s 18.6 year cycle. Northern maximum moonrise, the site’s main alignment.

Trail Ridge Road opens for the season May 24

ROCKY MOUNTAIN PARK — Trail Ridge Road in Rocky Mountain National Park is open for the season. Due to melting snow on the road visitors should be prepared for icy conditions. Alpine Visitor Center and Trail Ridge Store are anticipated to open May 25. At this time, night time closures will not be implemented. Because weather conditions may change rapidly, park visitors should be prepared to adjust travel plans accordingly and are encouraged to call the park’s Trail Ridge Road recorded phone line at (970) 586-1222. Park staff will update the recorded line during and after regular office hours, when the road status changes.