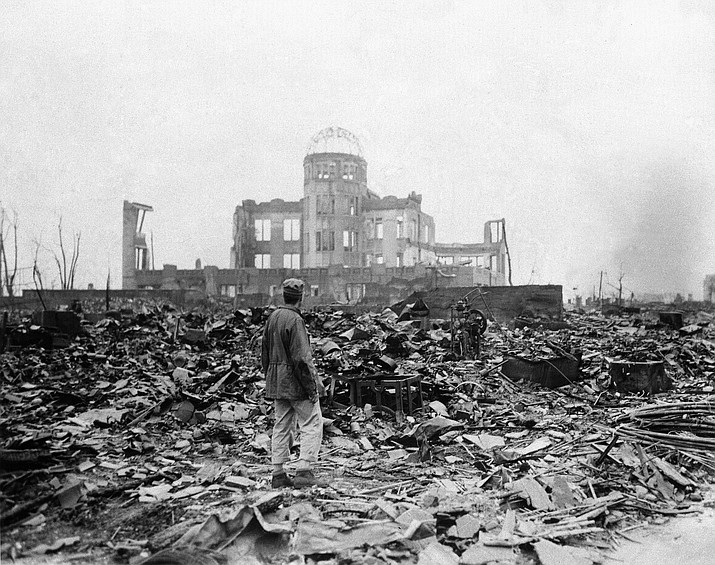 In this Sept. 8, 1945 file photo, an journalist stands on rubble near the shell of a building that once was a movie theater in Hiroshima, Japan, a month after the first atomic bomb ever used in warfare was dropped by the U.S. in World War II. (Stanley Troutman/Associated Press)

The uranium fueled atomic bomb “Little Boy” was dropped on Hiroshima, Japan, on August 6, 1945, at 8:16 am local time in Japan, resulting in the death of tens of thousands of people. It is one of only two times an atomic weapon was intentionally used on a human population. A second atomic weapon was dropped over Nagasaki, Japan, on August 9, 1945, also killing tens of thousands. World War II came to an end less than a week later with the surrender of Japan on August 15, 1945. The surrender became official on September 2, 1945, six years and one day after World War II began when Germany invaded Poland on September 1, 1939.

Lake Mead reveals resting place of B-29 that crashed while testing SunTracker in 1948
December 7, 1941: A date that has lived in infamy for 77 years
New World War II Memorial highlights Veterans Day 2000
Last survivors of Pearl Harbor attack to give final salute at USS Arizona
Boomers of Yesteryear