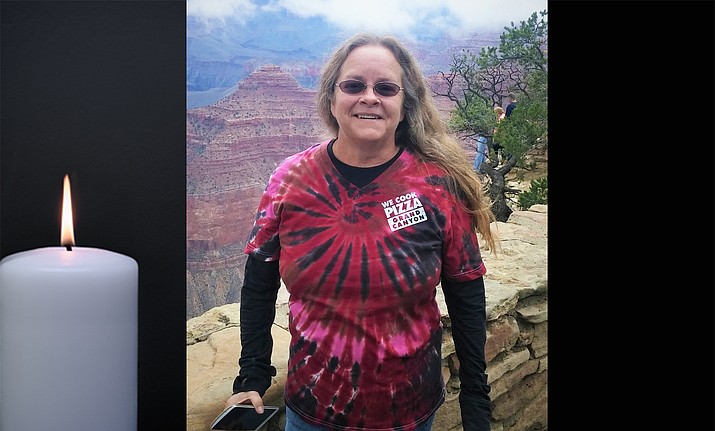 The ad in her local newspaper was huge, in bold letters, with a challenge clearly stated:

“FIND YOURSELF — AT THE GRAND CANYON”

Verna Mae Climie was 19-years-old in 1978, and like a few other teens who were longing for adventure, she was called to the great chasm by a lure of the Great Outdoors, to clean dishes for a Fred Harvey Bright Angel Lodge restaurant. She quickly got promoted to the front-of-the-house, and later scooped ice cream at the edge of the Canyon Rim in the Bright Angel Fountain.

She met Brian while working at the restaurant, and the two became inseparable. The Ciesielskis married in January 1980, and permanently relocated to Tusayan that winter. They celebrated the birth of their only child, Danielle, in late 1989, and raised her lovingly to this day.

Her most recent position has been spending the last 14 years working alongside Brian and Danielle at the We Cook Pizza and Pasta Restaurant, where she has been shaping hearts and minds of the younger individuals and helping guide and inspire the staff and management through daily inspiration and leadership. She would regularly buy specialty candy for the cooks. She would bring dozens of cupcakes to the staff after returning from a Flagstaff pilgrimage. She was just as thoughtful to the We Cook customers, often turning first-timers into regular patrons, locals and visitors alike. She made people want to come back, because she made everyone feel like they were in her own home, enjoying her personal brand of hospitality.

Christmas was Verna’s favorite holiday season, but she lived the giving spirit all year long. She enthusiastically celebrated other people’s birthdays and was commonly known to seek out loved one’s presents in July – or, May, or August, essentially all year long, whenever a gift “spoke” to her. Her house is scattered with scores of special presents waiting to be delivered at the “right” time.

Verna was an enabler: Every single person she met, from her friends to her associates, from her customers to the repair man, all became a better person knowing her, just meeting her. Each person’s life was enriched by her keen attention and exceptional anticipation to THEM. If one said that Everybody loved her, it would be an understatement: She had no enemies. None. And, that’s the way she wanted it.

She always would consider someone else above herself, and it showed through her uniquely thoughtful and kind nature. She disparaged only politicians, and then, only moderately. Everyone else was loved and nurtured in her kindness.

She has the respect and admiration of all, just like her parents, Hank and Dot - who have passed before her. Although they are now together, each are sorely missed here. Those individuals possessed the unique ability to improve a person’s life and well-being through generosity of individual character and compelling charisma. It has been one’s honor to have known them: such integrity and humanity is so very rare and refreshing. It is a life example most others find difficult to follow.

After more than 40 years, Verna Mae Climie Ciesielski had indeed found herself at the Grand Canyon, and she passed away peacefully at her Valle, Arizona home January 9, 2019. She is survived in life by her husband, Brian, and daughter, Danielle, and by her brother Jim Climie & family and Bill Climie & family, of Dayton, Ohio, as well as close friends Wayne and Margi Cook, and several hundred other close friends, family and associates. A community celebration of her unique life is scheduled for her 60th birthday, Friday, April 26, at the We Cook Pizza and Pasta restaurant, between 2 – 5 p.m. Special room rates have been negotiated for out-of-town guests, contact We Cook Pizza for details at (928) 638-2278. Please bring fond memories to share. Expect snow.